The Egypt striker posted a picture of him and his family members beside a Christmas tree, enjoying the occasion of Christmas 2021. But many fans criticized the forward for celebrating a non-Islamic festival while others came out in support of him. 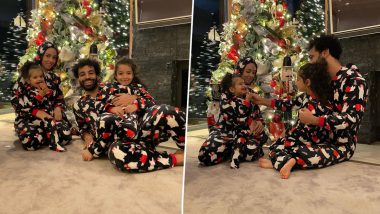 Mohamed Salah's recent social media pictures of him and his family celebrating Christmas has caused quite an outrage. The Liverpool star, who is one of the best players in the Premier League and has been in good form this season, took to social media to share wishes to his fans on the occasion of Christmas 2021. But many did not take this in right away as they felt that it was not right for a Muslim to be celebrating a Christian festival. Cristiano Ronaldo Crowned ‘Top Goalscorer of All Time’ at Globe Soccer Awards 2021, Kylian Mbappe, Robert Lewandowski Grab Honours (See List of Winners)

The Egypt international received a lot of hate and abuse on social media following this post as many felt this insulted Islamic sentiments. Salah currently resides in Liverpool and these pictures are from his house where he was seen spending some quality family time during the festival.

Take a Look at His Post and Some Comments on Them:

This Was With Relation to Salah’s Injury in the 2017 Champions League Final:

Some Drew Reference From Other Football Stars:

The Effects of living with Kuffar. The end results is to be drowned with the circumstance. Unfortunately!

However, this was not it. While some criticized him, others came to Salah's support as many argued that he was perhaps being criticized too harshly for posting an innocent family picture on a holiday.

See Some of the Comments Supporting Salah:

A lot of Christians congratulate Muslims during their holidays so why the backlash cos Mo Salah celebrates Christmas?This criticism is unnecessary, there's nothing wrong in celebrating other religions. Besides a lot of non-Christians also celebrate Xmas; It's a season of love.

I don't understand why some Muslims are angry at Mo Salah for wishing us a Merry Christmas when most of us Christians also wish them to have a wonderful Ramadan💁🏽‍♂️,please can any of y'all Muslim explain it to me why is it a problem. Isn't that hate? Congrats @MoSalah

I absolutely love this. Mo Salah is a great example of someone who creates bridges while not caring about the noise. The world needs more Mo Salahs. ❤️

Christmas Greetings to you and your family. These were taken yesterday in Cairo. How lovely for all communities to come together 🎄 pic.twitter.com/DfnCccxGlb

Salah has been on fire this season, leading both the scorers' and assisters' charts in the Premier League. This was reportedly the third consecutive year that the Egypt and Liverpool forward has posted a Christmas photo and got criticized for it.

(The above story first appeared on LatestLY on Dec 28, 2021 12:17 AM IST. For more news and updates on politics, world, sports, entertainment and lifestyle, log on to our website latestly.com).