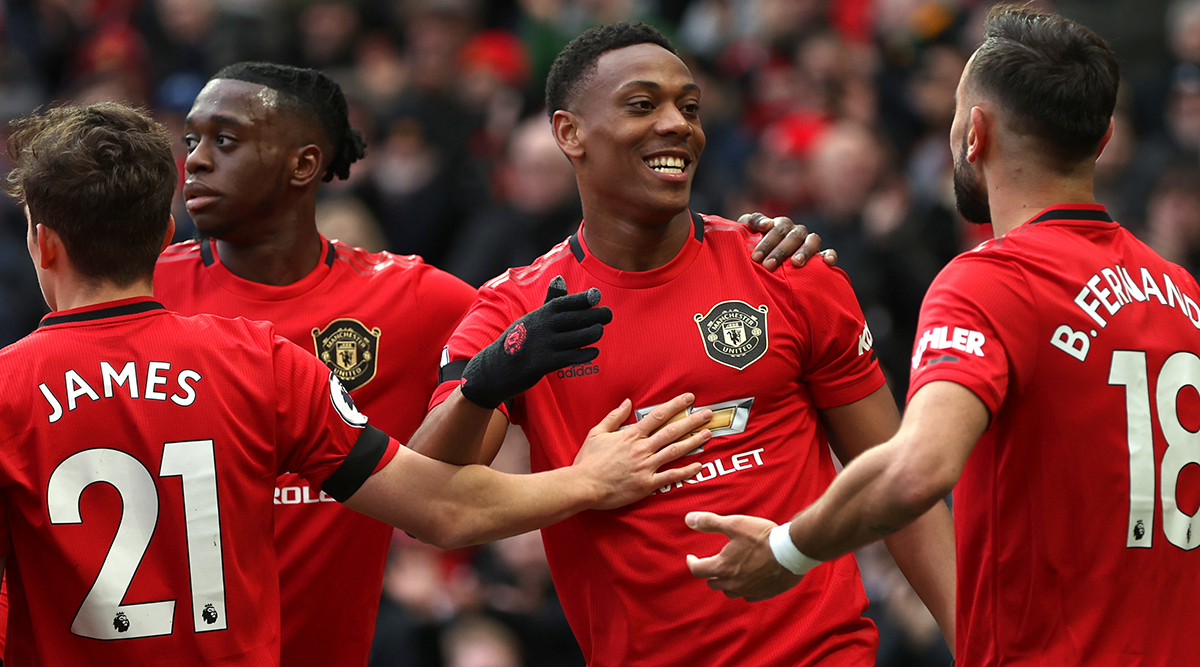 Manchester United will hope to extend its six-match unbeaten streak to one more game and see off Club Brugge in the 2nd leg of the round of 32 encounter in Europa League 2019-20. An insipid display in Belgium saw United somehow hold Club Brugge to 1-1 draw but Ole Gunnar Solskjaer’s men returned to winning ways with the 3-0 win over Watford and will want to carry on the same form against the Belgian side. United are unbeaten at home in European competitions since losing to Marcelo Bielsa’s Athletic Bilbao in 2012. Club Brugge, on the other, are yet to win a match in England in any competitions. Meanwhile, fans who play fantasy games like Dream11, can find all tips and team suggestions to pick a strong Dream11 team for MUN vs BRU, EUL last 32 encounter. Jurgen Klopp Writes to 'Cheeky' Manchester United Fan Daragh Curley Who Wants Liverpool to Lose.

Anthony Martial’s 36th-minute strike helped Man United return home with not only a draw but also the lucky advantage of an away goal. They were indeed lucky that Club Brugge – after going ahead as early as the 15th minute – failed to make most of their chances. The return of Mason Greenwood, who missed the 1st leg due to illness but came off the bench against Watford to score United’s third goal, will give the home some attacking boost as will be the return of Scott McTominay.

In contrast, Club Brugge will be without striker Emmanuel Dennis, who became the first from the Belgian club to score against United and Real Madrid in the same season. Club captain Rudd Vormer is also out due to suspension.

Manchester United vs Club Brugge, Europa League 2019-20, Dream11 Team Prediction: Goalkeeper – Sergio Romero’s (MUN) rare mistake saw United concede against Club Brugge in the 1st leg, while his opposite number Simon Mignolet (BRU) notched up an assist. But Romero has one of most safe pair of hands in world football currently and should be selected as the goalkeeping choice.

Manchester United vs Club Brugge, Europa League 2019-20, Dream11 Team Prediction: Defenders – Clinton Mata (BRU) has been the best centre-back for Club Brugge this season and should be picked as one of the three defenders. Record signing Harry Maguire (MUN) has been constant for United at the back and would be joined by Diego Dalot (MUN).

Manchester United vs Club Brugge, Europa League 2019-20, Dream11 Team Prediction: Midfielders – Bruno Fernandes’ (MUN) arrival at Old Trafford had rung a wind of change at the club and their improvement with him in the side is clearly visible. Fernandes, who has five goals and three assists already in the 2019-20 Europa League is a must pick and should also be appointed the captain. Hans Vanaken (BRU) has been the most productive player for Club Brugge and should be picked. The duo will be joined by Krepin Diatta (BRU) and Daniel James (MUN).

Manchester United vs Club Brugge, Europa League 2019-20, Dream11 Team Prediction: Forwards – Anthony Martial (MUN) is on a goal-scoring run and would be the first pick for the forward’s role. Mason Greenwood (MUN) is United’s highest scorer in the 2019-20 Europa league and is fit again. While in Emmanuel Dennis’ absence, David Okereke (BRU) will lead the line for Brugge.

Martial’s form will give enough assurances to the management at Old Trafford. Martial, who had scored just thrice in first 26 European games for United, has found the net three times in his last four Europa League games. He is also on a three-match scoring streak and will be eager to continue the run as the season approaches its business end.