Manchester City travels to Tyneside to take on Newcastle United knowing they have very little margin for error as they look to remain hot on the heels of Liverpool. 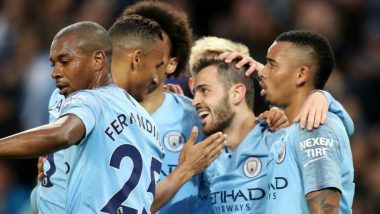 Manchester City travels to Tyneside to take on Newcastle United knowing they have very little margin for error as they look to remain hot on the heels of Liverpool. Pep Guardiola’s side has won their last six games in all competition and know a win against the Magpies is up for taking with their dismal inconsistency throughout the season. Having pulled themselves out of the relegation zone with a win against Cardiff City, Newcastle United lost to Watford in the FA Cup to halt any momentum they had gained with that win.

Benjamin Mendy is fit again but is unlikely to feature for Manchester City given his history of injury problems. Kyle Walker should make it to the playing eleven along with Kevin De Bruyne who has impressed off late. Raheem Sterling and Fernandinho have been the two ever-present players this season for the defending champions and the Newcastle Game would be no different. Sergio Aguero who has an impeccable scoring record against City’s opponents tonight would get the nod ahead of another quality player, Gabriel Jesus.

Majority of the big game players like Jonjo Shelvey, Mohamed Diame and Ki Sung Yeung are missing due to injuries. The loss of Yoshinori Muto to the Asian Cup has been huge for Rafael Benitez side and United really have not got going sans the Japanese player. Issac Hayden will start once again for the Magpies despite strong chance he will leave in the summer with the Englishman clearly not in the long term scheme of things.

Manchester City will win the game easily with Sergio Aguero getting a brace leaving Rafael Benitez and Newcastle United owner Mike Ashley in a jeopardy.

In the English Premier League (EPL), Reading takes on Manchester United on January 30, i.e. Wednesday. The game will take place at the St. James' Park, with the start time of 01.30 a.m (IST).

Where to Watch the Live Telecast of Newcastle United vs Manchester City, EPL 2018-19 Football Match?

If you are looking where you can watch the online streaming of the match, then you can log on to Star Sports' live streaming service, i.e. Hotstar. You can also catch the live football score updates on LatestLY, by clicking here.

(The above story first appeared on LatestLY on Jan 29, 2019 10:35 PM IST. For more news and updates on politics, world, sports, entertainment and lifestyle, log on to our website latestly.com).