The 29-year old had to be stretchered off the pitch after suffering from a horrific ankle injury. Although there has been no official word on the extent of his injury, it can be expected that he is ruled out for the remainder of this year. 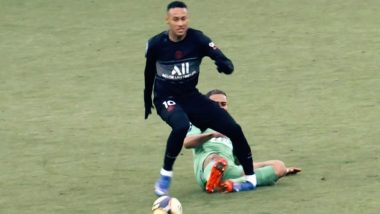 Neymar's horrific ankle injury outlined PSG's spectacular comeback victory over St. Etienne in Ligue 1 2021-22 on Sunday, November 28. The Brazilian winger had a horrific twist in his ankle during the match and had to be stretchered off. Despite Neymar's absence, 10-man PSG were bailed out of trouble by Lionel Messi, who clinched a hat-trick of assists as Mauricio Pochettino's men consolidated their lead at the top of the table. The match was also a memorable one as Sergio Ramos made his much-awaited debut for his new club after joining them in the summer transfer window from Real Madrid.

Take a Look at the Video of the Injury:

Hope he is fine and comebacks soon😞 #Neymar #PSG pic.twitter.com/zDzCcehums

The forward was grimacing in pain following this and had to be stretchered off. Though there has been no official statement from the club regarding this injury and what would be the duration for his recovery, PSG boss Mauricio Pochettino stated, "Right now there’s nothing to say. There’s pain. He’s going to have tests on Monday to find out a bit more about his injury."Neymar has had a history of injuries since joining PSG and this is a latest addition to that list.

The star player nonetheless, took to Instagram to share a message after this injury. He wrote, "'I'll come back better and stronger."

The injury looked really bad from the naked eye and it can be expected that he is ruled out of PSG's fixtures atleast for this year. PSG have a couple of league matches ahead before they play in the Champions League when they face Club Brugge on December 7.

(The above story first appeared on LatestLY on Nov 29, 2021 07:58 PM IST. For more news and updates on politics, world, sports, entertainment and lifestyle, log on to our website latestly.com).