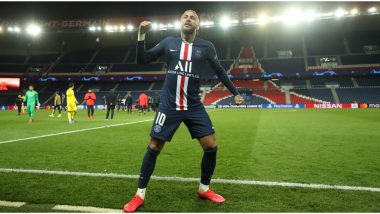 Barcelona have given a huge boost by PSG in their pursuit for Neymar Jr as the French club has named their demands if the Catalan club wants to bring the Brazilian back to Nou Camp. The 28-year-old forwards left for Paris in 2017, when he joined the Parisians for a record transfer fee of £198 million from the Blaugrana side. But after three years at his new club, he might be returning back to Spain. Neymar vs Barcelona: Brazilian Footballer Loses Lawsuit Against Spanish Club, Ordered to Repay €6.7 Million.

Paris Saint Germain signed Neymar Jr with the hopes that the Brazilian star could help them win the Champions League. But after failing to make an impact in European competitions, The French giants have decided it is time to let the 28-year-old go earn some money back off their investment. The Brazil international is also reportedly eager to join Barcelona. Neymar Barcelona Transfer Update: PSG Forward Unlikely to Return to Camp Nou.

According to El Chiringuito TV, PSG are willing to make a deal with Barcelona if they want to sign the forward this summer. The Ligue 1 side have asked for a fee of £72 million but also want Ousmane Dembele to be included in the deal, as they look to reshape their attacking unit.

The young Frenchman has endured a difficult time at the Spanish club as his game time has been significantly reduced due to injuries, Bit reports from sprain suggest that the 23-year-old is adamant of proving himself in Barcelona.

The La Liga club’s interests in bringing back Neymar is no secret and if they decide to accept the deal, the decision might be out of Dembele’s hands. Earlier in the year, even Barcelona captain admitted of wanting to have the Brazilian back. ‘Neymar is one of the best in the world and I'd love him to come back’ he said in an interview.

(The above story first appeared on LatestLY on Jul 15, 2020 07:21 PM IST. For more news and updates on politics, world, sports, entertainment and lifestyle, log on to our website latestly.com).