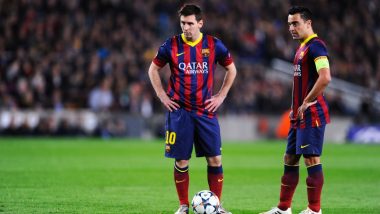 Lionel Messi has shown no signs of slowing down despite approaching the latter stages of his career. The Argentine isn’t as youthful as he was when he made his Barcelona debut in 2004 and perhaps the pace has decreased a little but the diminutive genius is still as athletic and can whirl past defenders in a flash despite being 35. Messi, who recently won his sixth Ballon d’Or trophy, is still leading Barcelona’s fort-line and is their talisman. Lionel Messi DESTROYS Barcelona in Training Session, Looks More Than Ready for Return (Watch Videos).

But fears have already been doing rounds as to what will happen when his magical and out worldly powers decline and his physical attributes start dwindling. According to former Barcelona coach, Domenec Torrent though there is little to worry as Messi can easily to fit into a new position when he approaches the twilight of his career. FIFA 21 Predictions: Lionel Messi to Get Higher Overall Ratings Than Cristiano Ronaldo in EA Sports’ Latest Game.

Torrent, who was assistant to former Barcelona coach Pep Guardiola and coached both Messi and Xavi for several years at the Catalan club, has backed the Barcelona captain to step into the role filled by Xavi during his years at the La Liga club.

"He's (Messi) a very intelligent player. Often, he drops deep to receive the ball. In a few years, he could play like Xavi if he wanted to,” Torrent was quoted as saying to Spanish publication Ole by Goal.com. Torrent was Guardiola’s assistant at Barcelona from 2007 to 2012 and worked under the Manchester City manager in both the senior as well as B team.

"He doesn't lose the ball, he gives assists, he has taken care of his body throughout his career. If he plays in a deeper position when he logically starts losing pace, he could play as a central midfielder or wherever he wants to and he would do well,” Torrent added.

Xavi enjoyed a trophy-laden 17-year career at Camp Nou and formed a formidable partnership with Messi, which saw the club win a staggering among of trophies. Xavi himself lifted 25 trophies, including eight La Liga and four Champions League trophies, at Barcelona and controlled the tempo of the game from the midfield. At his peak, he was celebrated as one of the game’s finest midfielders and is still celebrated as one of the greatest midfielders of all-time.

Torrent further described Messi as once in a lifetime talent and one that compares levels ahead if his peers and contemporaries. "For me, Leo is incomparable," he added. "I don't think I'll see anything like him again in my life. Furthermore, he has been at a high level for 15 years,” said Torrent, who also served as Guardiola’s no 2 at Manchester City before joining New York City as the head coach.

"On a day when he's not sharp, he's still the best. A poor game for Leo is two assists and a couple of moves leading to goals. I have seen enormous footballers, but nobody who has stayed in the elite for 15 years as he has done,” he added.

(The above story first appeared on LatestLY on May 29, 2020 11:00 AM IST. For more news and updates on politics, world, sports, entertainment and lifestyle, log on to our website latestly.com).