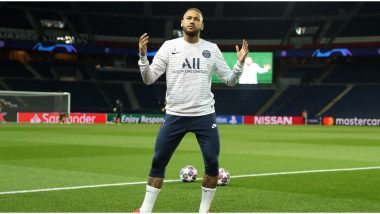 French club Paris Saint-Germain are confident that Neymar will remain at the club next season. The 28-year-old Brazilian has been heavily linked with a return to Barcelona in this summer transfer window but with the Catalan club now going through a financial crisis due to the coronavirus pandemic, PSG are optimistic that the Brazilian will stay at the club and also perhaps extend his current contract, which ends in 2022. Neymar was linked with a move the Barcelona throughout the last summer but no deal could be materialised between both clubs and Barcelona were expected to renew their interest in the Brazilian at the end of the current season. Neymar Jr Transfer News Latest Update: PSG Name Their Terms to Let Brazilian Join Barcelona.

But with COVID-19 hitting the football market badly, Barcelona are more focused into selling some players in this window and freeing up the funds for spending big perhaps next season. According to French outlet Le Parisien, PSG are making new plans to renew the contracts of both Neymar and Kylian Mbappe and tie both the superstars to long-term contracts. The reports state that the club wants Neymar to extend his contract to 2024.

The player is, however, patiently waiting for the right time. Reportedly, Neymar wants to see how the club performs in the UEFA Champions League, which begins in August, before taking a call on extending his contract. PSG have failed to perform up to expectations in recent seasons – they were knocked out by Manchester United in the last 16 last season – but the added rest will keep them fresh and ready for competition.

While four of Europe’s top-five leagues resumed their respective leagues in May-June, Ligue 1 was cancelled with PSG declared the champions. Thomas Tuchel’s men returned to training two weeks ago and have already played a couple of practice matches so far. They will be in action on Friday when they face St-Etienne in the 2019-20 French Cup final.

(The above story first appeared on LatestLY on Jul 24, 2020 07:52 PM IST. For more news and updates on politics, world, sports, entertainment and lifestyle, log on to our website latestly.com).