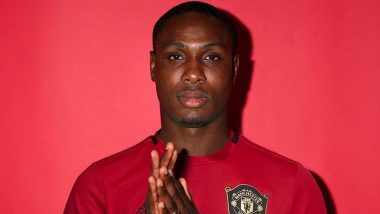 Odion Ighalo’s future at Manchester United has been a topic of huge debate in recent weeks. It is being reported that the Nigerian is expected to leave the club by the end of the month as talks of loan extension with parent club Shanghai Shenhua are not moving forward. And United manager Ole Gunnar Solskjaer provided an update on the deal, stating that nothing has been ’agreed’ as of now but hopes that the 30-year-old stays with them. Odion Ighalo Transfer News Update: Ex-Nigeria International Set for China Return After Talks of Loan Extension With Manchester United Stall.

Premier League rules permit the record English champions to extend the Nigerians loan deal but it is Ighalo’s parent club who want him back as the Chinese Super League is all set to start the country’s new football season. Solskjaer confirmed that negotiations are still going on but a resolution is yet to be reached. Manchester United Manager Ole Gunnar Solskjaer Says Players With ‘Personal Agendas’ Will Not Be Tolerated at Old Trafford.

‘The loan deal went until the end of May now, so obviously he’s supposed to be going back,’ the United manager told MUTV as quoted by Goal. ‘We’re in dialogue. They’ve been great towards us, his club, and allowed him to play for his dream club.’ The Norwegian added.

‘It’s been a dream for him and hopefully he can finish off what he started, hopefully with a trophy for us. At the moment, nothing has been agreed. Their league is going to get started soon so we’re just waiting to see’ the United boss said further.

The Nigerian arrived in January as an attacking reinforcement and since then has impressed United faithful in his eight appearances before the season was halted. In three starts, the 30-year-old has scored four goals and it is reported that he is eager to continue playing at the Premier League side in the future as well.

(The above story first appeared on LatestLY on May 26, 2020 11:53 PM IST. For more news and updates on politics, world, sports, entertainment and lifestyle, log on to our website latestly.com).