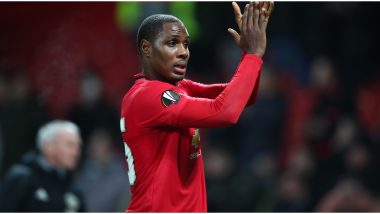 Odion Ighalo is set to leave Manchester United at the end of this week with talks of a loan extension for the striker with parent club Shanghai Shenhua meeting dead end. Ighalo’s short-term loan deal at Old Trafford is set to end on May 31 and although United have expressed interest in keeping the 30-year-old until the season end, Shanghai are unwilling to allow the striker remain in England. Ighalo, who joined United on a loan deal in the January transfer window, would have finished the season under normal circumstances but the coronavirus pandemic halted the English Premier League (EPL) and all other football tournaments resulting in a contract issue between Shenhua and Old Trafford. Manchester United Manager Ole Gunnar Solskjaer Says Players With ‘Personal Agendas’ Will Not Be Tolerated at Old Trafford.

United boss Ole Gunnar Solskjaer is also said to be impressed with the Nigerian international, who has scored four times in eight appearances for the Red Devils. But with Marcus Rashford recovering from his injury, Solskjaer is ‘relaxed’ about the situation knowing he will have a fit Rashford and Anthony Martial in addition to a young Mason Greenwood to score the goals. Mauricio Pochettino Backed for Manchester United Job in the Future by England Defender Danny Rose.

Ighalo, a former Watford striker, was brought in as a reinforcement for Rashford, who was almost ruled out for the remainder of the 2019-20 Premier League season with a double back strain, would have covered the season had the league not been suspended due to the pandemic.

Unless there is a last-minute breakthrough in negotiations between United and Shanghai, Ighalo is set to miss the remainder of the Premier League season – 9 matches – as well the rest of Red Devils’ campaign in the Europa League and the FA Cup.

But despite Rashford’s expected recovery, United are keen to keep Ighalo at least for the 2019-20 season end with matches bound to come thick and fast in the two months and Solskjaer is aware of the need to have as many options as possible to cover the remainder of the season. Shanghai though want Ighalo back to being their preparations for the start of the Chinese Super League, which has already been postponed from its regular February start. There is certainly no definitive date for CSL to start.

Reports also claim that the Chinese are prepared to sell the ex-Nigerian international but United have not made an offer. Solskjaer had in the past indicated his wish to make the loan deal permanent for the 30-year-old but is now looking for a more long-term reinforcement. The Norwegian has also suggested that United could explore the market for a young striker when the summer window opens.

(The above story first appeared on LatestLY on May 26, 2020 10:10 AM IST. For more news and updates on politics, world, sports, entertainment and lifestyle, log on to our website latestly.com).