Giroud's game time got limited drastically when the London club roped in the services of German striker Timo Werner from RB Leipzig. Thomas Tuchel would next target a striker to add to their ranks alongside Timo Werner. 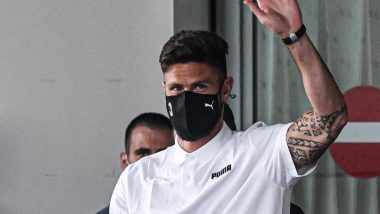 French striker Olivier Giroud has travelled to Italy and is reportedly undergoing a medical to complete his much talked-about move to AC Milan, on Friday. The Serie A outfit has been in pursuit of the Frenchman for a very long time in this summer and it looks like they have finally signed the forward. Giroud, thus would be moving from Chelsea after he signed a contract extension with the Champions League winners. His game time got limited drastically when the London club roped in the services of German striker Timo Werner from RB Leipzig. He would be looking forward to this Italian challenge after loads of experience of playing club football in Ligue 1 and the Premier League. Thiago Silva, Olivier Giroud Extend Chelsea Stay By Another Year

The Frenchman had scored 11 goals  in a total of 31 appearances for Chelsea last season. He would now sign with the Italian giants on a two-year contract and Milan would be paid  €1 million with another €1 as add-on bonus.

Chelsea had brought the French striker for a steal of an amount for  £18 million from Arsenal back in 2018. In a total of 118 appearances, he scored 39 goals for Chelsea. He won the FA cup , Champions League and the Europa League with the Blues and with Tammy Abraham also set to leave, Thomas Tuchel and co would be looking at reinforcements to boost their striker problems.

(The above story first appeared on LatestLY on Jul 16, 2021 03:09 PM IST. For more news and updates on politics, world, sports, entertainment and lifestyle, log on to our website latestly.com).