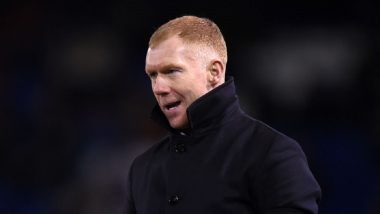 Manchester, July 5: Former midfielder Paul Scholes urged Manchester United to buy a pacy centre-back to partner Harry Maguire in the defence as, according to him, the Englishman has the tendency to get caught by speedy forwards. Maguire, who was bought for 80 million pounds from Leicester City, was partly guilty of letting in the first goal of the match against Bournemouth, which United eventually won 5-2. Junior Stanislas beat Maguire easily inside the box and slotted home the team's first goal, beating goalkeeper David de Gea on the near post.

Maguire was also heavily criticised after Tottenham Hotspur's Steven Bergwijin went past him easily and scored a goal in United's first Premier League match after coronavirus stoppage, which ended in a 1-1 draw. "I think you are looking at a centre-forward, a really classy goal scorer and possibly a centre-half to play next to (Harry) Maguire," Scholes told BBC Radio 5 Live as per Daily Mail when asked about what kind of players United will be targetting in the transfer market. Paul Scholes Likens Manchester United Midfielder Paul Pogba to Liverpool Legend Steven Gerrard, Says ‘He Can Do Everything as a Midfield Player’.

"I think (Victor) Lindelof has done alright but I just think Maguire with his lack of pace at times (can get caught). "If he's got a really dominant centre-half next to him like a Rio Ferdinand or Jaap Stam, who bullies centre-forwards, I think that would be a big help to the team," he added.

Following Stanislas' opener, young forward Mason Greenwood equalised for United in the 29th minute before they took the lead with a 35th minute penalty, converted by Marcus Rashford. Anthony Martial then scored in injury-time of the first half.

Bournemouth put United under pressure in the early stages of the second half and a handball from Eric Bailly led to a penalty which Josh King converted. It was, however, all United after that as Solksjaer's men hit the Bournemouth defence with wave after wave of attacks. In-form midfielder Bruno Fernandes scored from a free-kick in the 59th minute for United's fifth of the night.

(The above story first appeared on LatestLY on Jul 05, 2020 06:25 PM IST. For more news and updates on politics, world, sports, entertainment and lifestyle, log on to our website latestly.com).