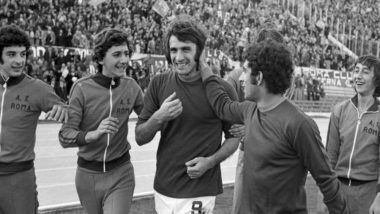 Milan, June 23: Former Milan and Italy forward Pierino Prati has passed away. He was 73. He famously scored a hat-trick in the final of European Cup in 1969 as Milan thumped Ajax 4-1.

Milan took to social media to mourn the demise of Prati and wrote on Monday: "Goodbye to a true Rossenoro legend. You were a shining light for us all and shall be dearly missed. Rest in peace Piero."

With Italy too he was as successful as he won the European Championship in 1968 and became a FIFA World Cup runner-up in 1970.

According to UEFA.com, Prati scored 72 goals in 141 Serie A games for Milan while he also found the back of the net on seven occassions for Italy in 14 outings.

Apart from Milan, Prati also featured for top Italian sides like Roma and Fiorentina and he also played for Rochester Lancers in the United States before retiring in 1981.

(The above story first appeared on LatestLY on Jun 23, 2020 12:54 PM IST. For more news and updates on politics, world, sports, entertainment and lifestyle, log on to our website latestly.com).