Liverpool stretched their Premier League lead to 13 points by outclassing second-placed Leicester in a 4-0 win on Boxing Day as Manchester United and Tottenham cut the gap on fourth-placed Chelsea. 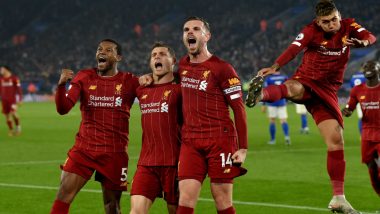 London, December 27: Liverpool stretched their Premier League lead to 13 points by outclassing second-placed Leicester in a 4-0 win on Boxing Day as Manchester United and Tottenham cut the gap on fourth-placed Chelsea.

Mikel Arteta got off to an underwhelming start as Arsenal manager with a 1-1 draw at Bournemouth, but Carlo Ancelotti had a more positive impact on his Everton bow as Dominic Calvert-Lewin's brilliant diving header earned a 1-0 win over Burnley.

Chelsea beat Tottenham in a big win for Frank Lampard over his former mentor Jose Mourinho on Sunday, but the gap between the two is back down to three points as the Blues lost 2-0 at home to lowly Southampton.

Spurs came from behind to beat Brighton 2-1 thanks to goals from Harry Kane and Dele Alli, while United moved just a point further back in seventh as they too overturned a poor start to thrash Newcastle 4-1 with Anthony Martial scoring twice.

- Liverpool lay down a marker -

Liverpool's trip to their closest challengers was the top billing of a busy Boxing Day card, but there was no contest as the newly crowned world champions showed their class.

"It's one of many successful nights so far this season," said Liverpool midfielder James Milner.

"We are not even halfway and so much can change and happen. The strength of this team is we take it one game at a time."

However, three goals in seven minutes in the final quarter ensured the scoreline fairly reflected their control.

Milner doubled the visitors' lead before Firmino's classy finish made it 3-0.

Trent Alexander-Arnold helped set up all of his side's first three goals and rounded off a stunning individual display by drilling home the fourth from outside the box.

"We played our last two games against two of arguably the best teams in the history of the Premier League," said Leicester boss Brendan Rodgers, whose side also lost 3-1 to Manchester City on Saturday.

After the highs of Sunday, Chelsea again struggled when faced with breaking down stubborn defensive opponents in Southampton.

The Blues have now lost to West Ham, Bournemouth and the Saints in their last four home league games.

"We are being asked a different question at home. At the moment we are not answering them," said a frustrated Lampard. "We do not manage to pick up that final pass."

The visitors then secured a second straight win to move up to 14th when Nathan Redmond prodded past the onrushing Kepa Arrizabalaga 17 minutes from time.

Spurs were still feeling the after-effects of that Chelsea defeat with Son Heung-min suspended and confidence low when Adam Webster headed Brighton ahead midway through the first half.

Kane swept home at the second attempt after his first shot was saved by Mat Ryan before Alli then delivered all three points with a delightful chipped finish from an acute angle.

United were also beaten 2-0 at bottom-of-the-table Watford on Sunday and another frustrating evening seemingly beckoned when Matty Longstaff scored his second Premier League goal - both of which have come against the Red Devils.

However, unlike when the Magpies beat Ole Gunnar Solskajer's men 1-0 in October, the response from United was emphatic.

Martial fired in at the near post with the help of Newcastle 'keeper Martin Dubravka before a thundering finish from Mason Greenwood and Marcus Rashford's header made it 3-1 before the break.

Another defensive error then teed up Martial to dink over Dubravka for the fourth early in the second half.

Arteta got an early lesson in the flaws that have blighted Arsenal's season as they were caught out trying to play from the back to concede the opening goal when Dan Gosling put Bournemouth in front.

Pierre-Emerick Aubameyang again rode to the Gunners' rescue to equalise just after the hour mark, but a point leaves Arsenal still down in 11th.

"It was intense, I was so excited, I just wanted to pass that energy to the players and I really enjoyed it," said Arteta.

Sheffield United are sixth, behind Tottenham only on goal difference, as they missed the chance to close to within a point of Chelsea in a 1-1 draw with Watford.

Crystal Palace climbed up to eighth thanks to Jordan Ayew's brilliant individual run and finish a minute from time to beat West Ham 2-1.

Aston Villa won the battle of two of the bottom three as Conor Hourihane's fine strike was enough to beat Norwich 1-0.

(The above story first appeared on LatestLY on Dec 27, 2019 09:09 AM IST. For more news and updates on politics, world, sports, entertainment and lifestyle, log on to our website latestly.com).