Sergio Ramos and Eden Hazard have joined first-team training for Real Madrid and could be given an outing against Elche. Dani Carvajal and Marcelo continue to miss games though for the hosts with a long-standing fitness problem. 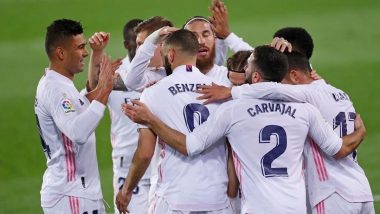 Real Madrid have not won in their last two league games which has seen them drop to third in the Spanish La Liga table. The Los Blancos somehow manage to deny league leaders Atletico Madrid a win in their previous match but the gap between the two clubs has now risen to eight. Next up for Zinedine Zidane’s men are Elche at home, which is a must-win game by all means. The season has been extraordinary by all means for the defending champions with injuries to key players part of their every matchday build-up. They have done well in Europe so far and still with an outside chance to claim the domestic title which bears testimony to the quality of the squad. Opponents Elche are 17th in the league and close to the drop zone. A defeat this evening might well see them join the relegation spot. Erling Haaland Transfer News: Real Madrid Make Borussia Dortmund Striker Their Top Priority.

Sergio Ramos and Eden Hazard have joined first team training for Real Madrid and could be given an outing against Elche. Dani Carvajal and Marcelo continue to miss games though for the hosts with a long standing fitness problem. Karim Benzema is crucial for the Los Blancos, coming up with crucial goals at the right moments. Casemiro has been more than a central defensive midfielder this season with some fine contribution in opposition box.

Emiliano Rigoni is the only player unavailable for Elche, which is a positive news ahead of a massive game. Guido Carrillo and Lucas Boye form the two man strike partnership with Raul Guti and Ivan Marcone as the box to box midfielder. Fidel is blessed with raw pace and trickery and he is the one that will likely make those forward runs from out wide.

Real Madrid vs Elche clash will be played on March 7, 2020 (Sunday) at the Estadio Alfredo Di Stefano. The match has a scheduled time of 08:45 pm IST.

Unfortunately, no TV channel holds the broadcast rights of La Liga 2020-21 in India. So, the Real Madrid vs Elche match will not be telecast on live on any TV channel.

Where to Get Free Live Streaming Online of Real Madrid vs Elche, La Liga 2020-21 Football Match?

With no live telecast available fans can still catch the action live, thanks to live online streaming. La Liga free online streaming is available on the Facebook app and website. Fans can visit La Liga’s official Facebook page to catch live streaming online of Real Madrid vs Elche for free. A routine win awaits Real Madrid and with Elche not expected to put much of a fight against a top side like that of the Los Blancos.

(The above story first appeared on LatestLY on Mar 13, 2021 06:45 PM IST. For more news and updates on politics, world, sports, entertainment and lifestyle, log on to our website latestly.com).