The UEFA Champions League final, Real Madrid vs Liverpool will be live broadcast on the Ten Network tv channel (Ten 2 and Ten 2 HD) in India while online live streaming will be available on the Sony LIV app. 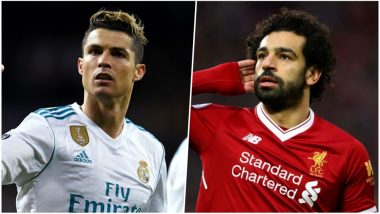 The UEFA Champions League final is finally here, and Liverpool and Real Madrid, two of the most attacking mind teams playing in the final is a fantastic advertisement for the game. Jurgen Klopp and Zinedine Zidane by the looks of things will not hold back and may look to attack from the onset. The UEFA Champions League final, Real Madrid vs Liverpool will be live broadcast on the Ten Network tv channel (Ten 2 and Ten 2 HD) in India while online live streaming will be available on the Sony LIV app. The fans will be desperately counting downtime for the encounter to begin at 12.15 am IST at NSC Olimpiyskiy Stadium, Kiev while it also promises great entertainment for the neutrals.

Jurgen Klopp will have high hopes from EPL Golden Boot winner and PFA player of the year-Mo Salah and his partnership with Sadio Mane and Roberto Firminio. His drive and energy has made Salah a fan favourite and if ever there was a player you would feel can beat Lionel Messi and Cristiano Ronaldo to the title of World’s best player, it is the Egyptian and a win in Kiev will pretty much cement his place as the best. Captain Jordan Henderson and James Milner will have to work their shocks off to stop the Real Madrid midfield which has serial winners in it. They have not met an opponent of this magnitude till now in the Champions League and will have to adapt quickly.

Real Madrid failure to win a domestic silverware has driven them to perform exceptionally well in Europe as a season without trophies is almost unimaginable in the Spanish capital. Zinedine Zidane has the Midas touch when it comes to the Champions League as he has won the competition back to back and looks to complete an unprecedented hat-trick. Cristiano Ronaldo may be getting old but still remains the deadliest finisher in the game as he has moulded himself well. The pace and trickery have been replaced by intelligent positioning and far more passes. Luka Modric and Tony Kroos run the show as the two engines of this Real Madrid plane while Isco or Gareth Bale will be the attacking force assisting Karim Benzema.

As we are all set for the mouthwatering clash of Real Madrid vs Liverpool, here take a look at all the information on live streaming and telecast details in addition to the general information such as date, start time in IST and venue. We also present to you the probable starting XI of Liverpool-Real Madrid clash.

What is the Date, Time and Venue of Real Madrid vs Liverpool, UEFA Champions League Final?

The UEFA Champions League 2018 trophy final featuring Real Madrid CF and Liverpool FC will be played on May 27, Sunday. It will kick-start at 12.15 am IST (6.45 pm GMT Saturday night) at Olimpiyskiy National Sports Complex, Kiev.

Which TV channels in India Will do Live Telecast of Real Madrid vs Liverpool, UEFA Champions League Final?

Ten Network tv channels (Ten 2 and Ten 2 HD) will broadcast the live action of Real Madrid vs Liverpool for football fans in India.

Sony Liv app is where all the fans who for any reason cannot get live telecast of UEFA Champions League 2018 final match between Real Madrid and Liverpool can catch the live action. They are providing with the live streaming option to watch the final game online.

(The above story first appeared on LatestLY on May 26, 2018 09:15 PM IST. For more news and updates on politics, world, sports, entertainment and lifestyle, log on to our website latestly.com).