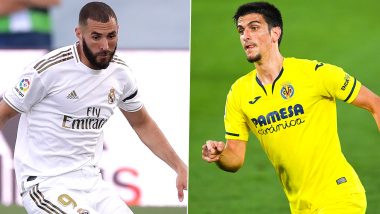 Real Madrid stand on the cusp of title glory and a win against Villarreal in their next La Liga 2019-20 fixture will seal the league title for Los Blancos. The title victory will only be their second La Liga win after 2016-17 and Madrid will hope to clinch it at home although in an empty stadium. Real Madrid need only two points from their next two matches to clinch the title but a win against Villarreal, who have lost two of their last three league games, will make it sweeter for Zinedine Zidane and his men. Meanwhile, fans searching for all the tips and team suggestions to pick the best Dream11 fantasy team for Real Madrid vs Villarreal match, please scroll down. All Real Madrid Players Deserve Ballon D'Or, Says Zinedine Zidane.

Villarreal started well with six unbeaten games, five of which were wins when the season resumed. But a 1-4 defeat to Barcelona seems to have derailed their campaign. They did beat Getafe 3-1 after the Barcelona defeat but succumbed to a 1-2 loss against Real Sociedad. Both their defeats have surprisingly come at home.

They have the fourth-best away record in La Liga this season. Villarreal will be without Ramiro Funes Mori and Carlos Bacca both of whom are nursing injuries. Mariano Barbosa is also suspended for this match but Gerard Moreno and Vicente Iborra are both available. Madrid are without Marcelo and Nacho due to injuries while January signing Luca Jovic is a major doubt. Marcos Asensio and Eden Hazard are, however, expected to start.

Real Madrid striker Karim Benzema (RM) should be picked as the captain of this fantasy team while Gerard Moreno (VIL) should be made the second-choice captain.

(The above story first appeared on LatestLY on Jul 16, 2020 03:14 PM IST. For more news and updates on politics, world, sports, entertainment and lifestyle, log on to our website latestly.com).