The Polish striker has been on Barcelona's radar all summer so far and the Catalan giants are said to be tabling one final offer to Bayern Munich for signing him. Lewandowski had earlier turned down a contract offer from Bayern Munich. 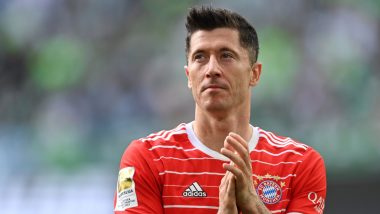 Barcelona are reportedly set to make one last offer to Bayern Munich for signing Robert Lewandowski, next week. The Polish striker has been linked all summer to a move to Barcelona and the Catalan giants are seemingly ready to go in for the player with a final offer. Bayern Munich have reportedly set a  £43m price for letting Lewandowski leave for Spain.  Barcelona Unveil Olympic-Inspired Second Kit for 2022–23 Season (See Pics)

The prolific scorer has turned down contract renewal offers at Bayern Munich and is said to have been interested in moving to Barcelona. According to a report in Sport, Barcelona are confident that their offer would be accepted by Bayern after Pini Zahavi, the player's agent held talks with the German champions. Barcelona's initial  £30m offer without add-ons was rejected by Bayern Munich.

Bayern Munich's signing of Sadio Mane was learnt to be a massive boost in Lewandowski's transfer to Barcelona. The Polish forward had reportedly expressed unwillingness to be part of Bayern Munich's pre-season, the training for which would begin on July 12. Barcelona manager Xavi also is said to have been eager to have a striker of Lewandowski's calibre at the club and his partnership with winter signing Pierre Emerick-Aubameyang can turn out to be one deadly combination.

(The above story first appeared on LatestLY on Jun 27, 2022 03:09 PM IST. For more news and updates on politics, world, sports, entertainment and lifestyle, log on to our website latestly.com).