Russia will be playing Saudi Arabia in the inaugural match of FIFA World Cup 2018 on June 14. 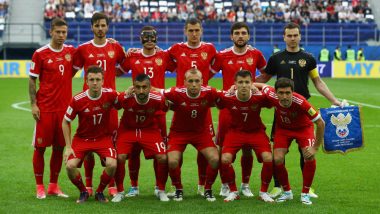 The host nation is placed in the Group A along with Saudi Arabia, Egypt and Uruguay. Russia will be playing Saudi Arabia in the inaugural match of 2018 FIFA World Cup on June 14, which will be followed by two more group-stage games – vs. Egypt on June 19 and vs. Uruguay on June 25. Russia will be determined to qualify for the knockout phase of the FIFA World Cup for the first time in the post-Soviet era, but a string of injuries is threatening to derail their 2018 campaign. Here's a look at a Russia preview with complete schedule timetable, final 23-man world cup squad, match dates and kick off times. 2018 FIFA World Cup Schedule in IST for PDF Download: Fixtures, Groups, Time Table with Matches in Indian Time & Venue Details of Football WC in Russia.

An issue revolving around the Russia world cup squad is the lack of competitive matches that the national football team has not played since the Euro 2016 being the host nation for the World Cup. The qualifiers are considered very important for average teams like Russia as it gives them the reality check much needed from time to time. Head coach Stanislav Cherchesov has stamped his authority over the team since a poor European championship, but a lot still needs to be done.

The injuries to Viktor Vasin and Georgy Dzhikiya is a massive blow and their place in the team should be taken by Vladimir Granat, Ruslan Kambolov, Fedor Kudryashov all of whom play for Rubin Kazan and know each other's game well. Their midfield has the old warhorses like Alan Dzagoev, Alexander Erokhin and Yuri Zhirkov who have rich experience under their belt. Goalkeeper Igor Akinfeev has 104 caps under his name and is the leader of the squad. 2018 FIFA World Cup Group A Preview: Schedule Timetable With Match Dates, Venues & Kick-Off Times in IST of Russia, Egypt, Uruguay and Saudi Arabia in Football WC.

The striking department too is feeling the heat with star forward Alexander Kokorin being left out as he failed to recover from the right knee injury. Fyodor Smolov, who is a two-time Russian Premier League top scorer, should start for Russia in the World Cup with Alexei Miranchuk playing as the backup striker.

Being the host nation, Russia did not have to go through the qualifying campaign and made it to the World Cup via the automatic route.

Russia were placed in Group H of the FIFA World Cup in Brazil and finished third in the group behind Belgium and Algeria. They drew 1-1 with Algeria and South Korea while going down by a single goal against Belgium, thus getting eliminated at the group stage.

Players to Watch Out for in 2018 FIFA World Cup

Alan Dzagoev: The attacking midfielder is a very crafty player with the ball at his feet and creates vital chances in the final third of the field. The striker will look to him to feed them with the defense splitting passes and he is quite capable of scoring goals too.

Igor Akinfeev: The Russian keeper is calm and composed and very good with dealing with long balls. With the World Cup in his backyard, Akinfeev will be relishing the opportunity to end his international career on a pleasant note.

(The above story first appeared on LatestLY on Jun 14, 2018 01:25 PM IST. For more news and updates on politics, world, sports, entertainment and lifestyle, log on to our website latestly.com).