Now without a club, for the time being, Sergio Ramos is expected to sign with Paris Saint Germain. The 35-year-old centre-back will soon undergo medicals for the Parisian club with his announcement expected to be made official in the coming weeks. 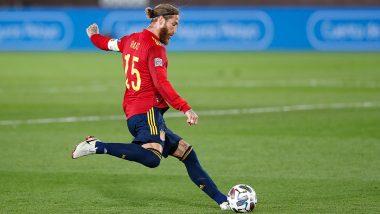 Following his exit from Real Madrid after 16 years at the club, Spanish defender Sergio Ramos is set to sign with French giants Paris Saint Germain in the coming weeks. The World Cup winner left Los Blancos after he and the club were unable to reach an agreement over his new contract which expired last month, making the 35-year-old a free agent. Sergio Ramos Transfer News: Spanish Defender Makes PSG Move His Priority.

Now without a club, for the time being, Sergio Ramos is expected to sign with Paris Saint Germain according to Fabrizio Romano. The 35-year-old centre-back will soon undergo medicals for the Parisian club with his announcement expected to be made official in the coming weeks. It is understood that the world cup winner will join the Ligue 1 outfit for two years, keeping him at the club till 2023.

Sergio Ramos will undergo his medical in the next hours then he’ll sign with PSG until June 2023. 🔴🔵

Official announcement coming also for Hakimi and then Donnarumma.

PSG are working since months to sign Moise Kean on loan - waiting for Benitez and Everton final decision. 👇🏻 https://t.co/uleeL6GNr8

Paris Saint Germain have remained highly active in the transfer window as they look to end their drought in the Champions League after coming close in the past couple of years. The Parisians have already signed Geirgino Wijnaldum on a free transfer with many other signings lined up for the coming weeks.

Along with Sergio Ramos, the Ligue 1 giants are close to complete the signing of Italian keeper Gianluigi Donnarumma for free and Inter Milan full-back Achraf Hakimi for a mammoth transfer fee. The Parisians are also working on a loan move for Moise Kean but it will depend on the decision of new Everton manager Rafa Benitez,

(The above story first appeared on LatestLY on Jul 06, 2021 10:53 AM IST. For more news and updates on politics, world, sports, entertainment and lifestyle, log on to our website latestly.com).