The stalwart defender would head to the Santiago Bernabeu to take on Real Madrid, a club he played for 16 years. He however has allegiances set ahead of his return to Spain. 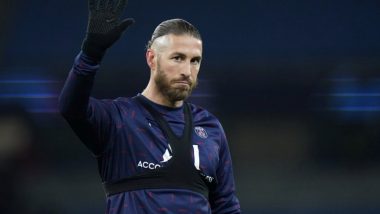 "You know the affection and love I have for Real Madrid," Ramos said, as quoted by Goal.com, adding, "Now it's my turn to defend PSG and I'll do everything possible to do it. It's the team that bet on me. I'm going to die for PSG. I would have liked not to have that confrontation [with Real Madrid], but returning to the Santiago Bernabeu is cause for joy [because] I could not have a real farewell because of Covid restrictions."

Ramos did not find a perfect start to life at PSG as he would have wanted. He sustained a calf injury which prevented him from competing till this November when he made his debut for the French giants. Currently, he is out with a muscle injury again. The Spanish defender further shared how he left in his early days at PSG. "It has been hard, different from what I have experienced in my career. Injuries have [rarely been like this]. To feel like a player again is the important thing. Many hours of darkness, loneliness, but it has helped me to overcome challenges. It has helped me to know who were really there and who were not. There will be Ramos for a while. The family is already well adapted. I smile again thinking about competing again," he shared. Sergio Aguero Reportedly Set To Announce Retirement From Football in Press Conference on Wednesday

It would be interesting to see if Ramos gets fit in time to return to the Santiago Bernabeu, this time in PSG colours in 2022.

(The above story first appeared on LatestLY on Dec 14, 2021 10:21 PM IST. For more news and updates on politics, world, sports, entertainment and lifestyle, log on to our website latestly.com).