South Korea Squad for 2018 FIFA World Cup in Russia: Lineup, Team Details, Road to Qualification & Players to Watch Out for in Football WC

South Korea registered a fine 2-0 victory over Honduras in their international friendly game on May 28 at Daegu Stadium, South Korea. Taegeuk Warriors will now be playing Bosnia on June 1, Bolivia on June 7 and Senegal on June 11. 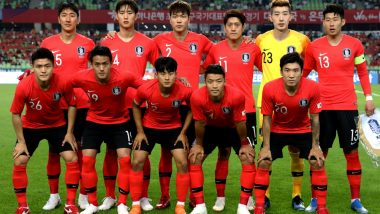 South Korea is a World Cup regular and will fly to Russia in what will be its ninth successive appearance in the tournament taking it to a select club consisting of Brazil, Germany, Argentina and Spain. While qualifying has never been the problem for the Red Devils from Asia, it is the progression to the knockout phases that poses a major challenge. They have made it out of the group stage only twice in these attempts which paints a very sorry picture. The squad that has been chosen for 2018 FIFA World Cup has been described as having a few Premier League stars and nothing much else to take note about. We will take a look at team lineup, squad details, road to qualification & players to watch out for in the football world cup. FIFA World Cup 2018 Schedule in IST for PDF Download: Fixtures, Groups, Time Table with Match Timings & Venue Details of Football WC in Russia.

Kim Seung-Gyu is South Korea’s number 1 goalkeeper and though lacking experience is tidy enough in goal. The main headache for coach Shin Tae-Yong is the defense which concedes a lot of goals, and he will be hoping Lee Yong, Kim Young-Gwon, Jang Hyun-Soo, Kim Jin-Su stem the tide for his team. The midfield has skipper Ki Sung-Yueng of Swansea City who has been consistently playing in the English top division for quite some time while Lee Chung-Yong of Crystal Palace is another name although he is not a regular starter for his club. 2018 FIFA World Cup Friendlies Fixtures: Check Full Warm-Up Schedule Timetable in Indian Time for Germany, Brazil, Spain, England, Argentina and All 32 Countries.

The striking department boasts of Tottenham’s Son Heung-Min who has become a rising star in London on back of some fine performances for his club. He has even out shown Harry Kane in quite a few matches, and along with Hwang Hee-Chan should start in a 4-4-2 for South Korea.

South Korea finished second in Group A of the AFC World Cup qualifiers third round behind Iran with 15 points. They won four out of ten games they played and scored 11 goals and conceded 10 in the campaign. Ki Sung-Yueng and Koo Ja-Cheol were the leading scorers for South Korea with two goals in this phase.

South Korea drew their opening game in Group H 1-1 with Russia but was completely outplayed by Algeria in the second with the game ending 4-2. A disappointing campaign in Brazil ended with a loss to Belgium by a single goal to finish rock bottom in the group.

Son Heung-Min: The technically gifted 25-year-old has quietly established himself as a star in the English Premier League, a rare feat for an Asian player. His ability to run with the ball and take on defenders on the forward areas makes him a threat for opponents.

Ki Sung-Yueng: He is the most experienced man in this current squad and has played at the highest level for the country for quite some time now. He is a very busy player and keeps the passing game ticking for his team. He is essentially the heart of the team and players look to him to create openings from midfield.

South Korea registered a fine 2-0 victory over Honduras in their international friendly game on May 28 at Daegu Stadium, South Korea. Taegeuk Warriors will now be playing Bosnia on June 1, Bolivia on June 7 and Senegal on June 11. Group F-placed South Korea will begin their FIFA World Cup 2018 campaign against Sweden on June 18 at Nizhny Novgorod Stadium, Nizhny Novgorod.

(The above story first appeared on LatestLY on May 29, 2018 04:27 PM IST. For more news and updates on politics, world, sports, entertainment and lifestyle, log on to our website latestly.com).