Sweden Squad for 2018 FIFA World Cup in Russia: Lineup, Team Details, Road to Qualification & Players to Watch Out for in Football WC

Sweden vs Denmark on June 2 and Sweden vs Peru on June 9 are two international friendlies the Blue-Yellow unit be playing before they fly off to Russia. 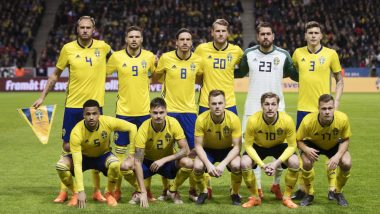 Sweden has a good record at the World Cup in terms of making it to the knockout stage of the competition since 1990, and as they gear up to play their first World Cup match in 12 years in Russia, hopes are running high from the Swedes to carry its excellent record. No one had given Sweden a chance to book a part of 2014’s biggest sporting extravaganza in Brazil, but against all the odds a united Sweden squad proved many wrong. For 2018 FIFA World Cup, Sweden announced the world cup squad flying to Russia. They have come out of the shadow of perhaps their greatest ever player, Zlatan Ibrahimovic by clearly stating he will not be a part of the national team set up when there were talks to bring him back. FIFA World Cup 2018 Schedule in IST for PDF Download: Fixtures, Groups, Time Table with Match Timings & Venue Details of Football WC in Russia.

33-year-old Andreas Granqvist is the lynchpin in defense and the veteran’s reign as a leader is going on a very good note. Celtic’s Mikael Lustig is capable of playing both at full back and central defense positions and will preferably be put in as right back due to the presence of Victor Lindelof. Goalkeeping department lacks experience with Robin Olsen, who has played just 16 times for Sweden slated to start in Russia.

Hull City’s attacking midfielder and team vice-captain Sebastian Larsson and three-time Swedish midfielder of the year Emil Forsberg are the two main men around whom much of the game evolves. They do not have any big name in the striker’s position, and the starting eleven should see Marcus Berg play up top.

Sweden finished second behind France in Group A of European Qualifiers where they finished tied on the Netherlands on points with 19 in the kitty, but a more superior goal difference saw the Dutch missing out on the play-off match. Sweden met Italy in the play-off where a single goal was scored over the two legs in favour of Sweden thanks to some miraculous defending by them in Milan to realise a World Cup dream.

Sweden was knocked out by Portugal in the European play-off match for the 2014 World Cup 4-2 on aggregate with Cristiano Ronaldo scoring all the four goals for Portugal over the two legs.

Victor Lindelof: He has endured a tough time in England with Manchester United, but towards the second half of the season, whenever he did start he had an impact on the game with some brilliant reading of the game from the back. He is very important for Sweden as he is been deemed as the future skipper of the team.

Sebastian Larrson: His goal against France in their famous 2-0 win in Euro 2012 is still fresh in the minds of Swedish supporters and now 32 and possibly playing his last tournament with Sweden, the Hull midfielder would be hoping to go all guns blazing.

Sweden vs Denmark on June 2 and Sweden vs Peru on June 9 are two international friendlies the Blue-Yellow unit be playing before they fly off to Russia. Sweden placed in Group F with South Korea, Germany and Mexico will play their tournament opener against the Korea Republic on June 18.

(The above story first appeared on LatestLY on May 29, 2018 05:03 PM IST. For more news and updates on politics, world, sports, entertainment and lifestyle, log on to our website latestly.com).