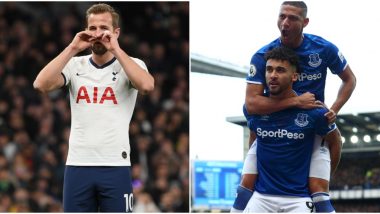 Tottenham Hotspur will eye a win when they welcome Everton to North London in Premier League 2019-20 on Monday. Everton are on a three-match unbeaten run and have won their previous two games after returning to action, from a three-month break, with a goalless draw against eventual new champions Liverpool. Tottenham Hotspur held Manchester United to 1-1 draw in their first game back and beat West Ham 2-1 in their next. But were beaten 1-3 by Sheffield United, who were until that win on a three-match losing run and had not won a league game since March. Tottenham Hotspur vs Everton, Premier League 2019-20 Free Live Telecast and Streaming Online.

Everton though are winless in their last 14 league meetings with Tottenham Hotspur with their last win against Spurs coming in December 2012. Since then, they have drawn and lost seven each without tasting victory. Carlo Ancelotti’s side are placed 11th in the standings and are five points away from the final Europa League spot with a match in hand. Tottenham are a point and position above them in the standings.

Both teams have a number of injury concerns with Dele Alli’s reported hamstring the major headline. Mourinho, however, refused to rule the Englishman out of the Everton clash. Defenders Juan Foyth and Japhet Tanganga are both sidelined for Spurs. Everton too have a similar problem with Richarlison, who hobbled off against Leicester and missed the training session on Saturday. But coach Ancelotti insisted the Brazilian will be available. The visitors are also set to welcome right-back, Djibril Sidibe, into the side.

Tottenham Hotspur striker Harry Kane (TOT) can be appointed as the captain of this fantasy team while Dominic Calvert-Lewin (EVE) can be made the vice-captain. Calvert-Lewin has been in terrific form of late while Kane is a seasoned goalscorer.

(The above story first appeared on LatestLY on Jul 06, 2020 04:46 PM IST. For more news and updates on politics, world, sports, entertainment and lifestyle, log on to our website latestly.com).