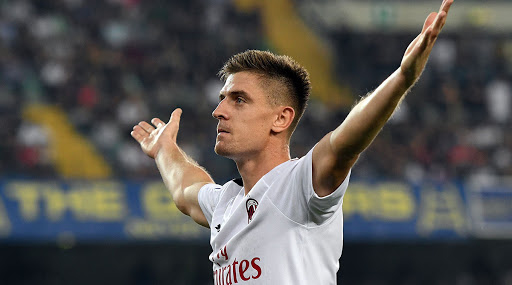 Tottenham Hotspur are interested in signing AC Milan front-man Krzysztof Piatek according to the reports emerging from England. Spurs are looking at the Polish striker as a possible replacement to Harry Kane who recently suffered a hamstring injury in the Premier League clash against Southampton and will be out of action for few weeks. The Rossoneri have recently resigned their former striker Zlatan Ibrahimovic on a six-month loan deal and are willing to sell the 24-year-old Polish forward if a proper offer arrives in the upcoming January transfer window. Moussa Sissoko Injury Update: Tottenham Hotspur Midfielder Out for Three Months Post Knee Surgery.

As reported by The Guardian on Wednesday, Tottenham Hotspur have joined the race to acquire the services of Krzysztof Piatek from AC Milan. Spurs have lost Harry Kane due to an injury and this leaves manager Jose Mourinho without a recognised centre-forward for the time being. The Portuguese manager is eager to sign a front-man in the mid-season transfer window but whether Chairman Daniel Levy obliges to his request is remained to be seen. Piatek has had an underwhelming season so far as the Polish international has netted just four times in his 18 appearances so far and with the arrival of Ibrahimovic, his stay in Milan may come to an end. Manchester United Transfer News: Red Devils Confident of Signing Donny van de Beek From Ajax.

Along with Tottenham Hotspur, fellow Premier League clubs such as Aston Villa, Newcastle United and West Ham are also interested in signing the 24-yar0old striker. Piatek joined Milan from Genoa in January 2019 for 30 million pounds and it looks like the Italian side are ready to let the forward go if they receive a decent offer. Spurs in a dire need of a striker at the moment and Piatek could be the man they go for to solve their striker troubles.