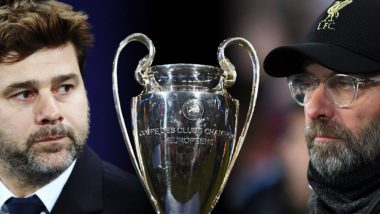 The finals of the 2018/19 UEFA Champions League sees the clash of two English clubs in Tottenham Hotspurs and Liverpool. After a gap of eleven years, England will have two of its representatives in the marquee clash which tells us about the rise in the standard of their football this year. Tottenham Hotspurs and Liverpool have both removed much-fancied opposition in the semis in dramatic fashion. They were down and out in the group stage too and needed a solid performance in on the final group stage night to progress. This is the second straight finals for the Reds and another defeat will really hurt the credibility of Jurgen Klopp. For Tottenham Hotspurs vs Liverpool Champions League final live streaming online, scroll down. Tottenham Hotspur vs Liverpool - Live Football Score.

Harry Kane has been involved in first team training for the past week and the English captain is hoping to play some part in the final. Ankle injuries have marred Kane’s season since the turn of the year and ahead of the Nations League, fans will be hoping he is back to full fitness. Hero of the semi-final win over Ajax, Lucas Moura may shift wide if Kane starts allowing Son Heung-Min to attack from the right wing. Toby Alderweireld and Jan Vetonghen will be the two men marshaling the goal with captain Hugo Lloris between the sticks. Tottenham Hotspur vs Liverpool UEFA Champions League 2018–19 Final, Here Is What Unfolded in the Last Five TOT vs LIV Matches.

Roberto Firmino has been battling muscle injuries for the past month but could start in Madrid in his centre forward role. Sadio Mane and Mo Salah will be on either side of Firmino to make up Liverpool’s famed attacking trio. Jordan Henderson was brilliant against Barcelona and should start with Georginio Wijnaldum and Fabinho providing the attacking impetus from the middle of the park. Joel Matip and Virgil Van Dijk have paid rich dividends for Liverpool in defence and the duo will make sure they do not let the London club dictate terms.

(The above story first appeared on LatestLY on Jun 01, 2019 10:00 PM IST. For more news and updates on politics, world, sports, entertainment and lifestyle, log on to our website latestly.com).