Tottenham Hotspur vs Liverpool UEFA Champions League 2018–19 Final, Here Is What Unfolded in the Last Five TOT vs LIV Matches

Liverpool finished second in the 2018-19 Premier League losing the title by a single point to eventual winners Manchester City. Tottenham Hotspur came fourth but a staggering 26 points behind. 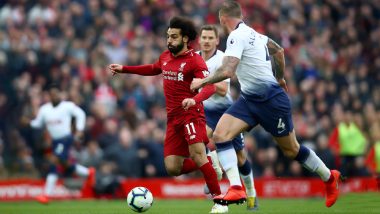 Five-time winners Liverpool meet Tottenham Hotspur in the first all-English Champions League final encounter since 2008 at the Wanda Metropolitano Stadium in Madrid. Tottenham are chasing their first-ever title of Europe’s elite competition. Both teams showed tremendous spirit to overcome first-leg defeats in the semi-finals and make it to the final. While the Reds, who lost to Real Madrid in the same stage last season, overcame a 0-3 deficit and beat Barcelona 4-3, Tottenham progressed on away goals after securing a last-gasp 3-2 victory at Amsterdam. Both sides have each other numerous times in their domestic competitions, but Liverpool holds the edge with 82 victories in 172 games against their rivals in the summit clash. Ahead of the 2019 Champions League final game, here’s a look back at what unfolded in the last five fixtures between Liverpool and Tottenham Hotspur. Tottenham Hotspur vs Liverpool, UEFA Champions League 2019 Final Match: Reds Go Glory-Hunting in Madrid.

In their last five encounters, Liverpool has walked out comfortable winners three times, while losing just once – a 1-4 defeat in 2017. The Reds are also on a run of four victories and only one defeat in their last five matches across all competitions, while Spurs have lost three and drew another, including the 0-1 defeat at home to semi-final rivals Ajax FC. Tottenham Hotspur vs Liverpool - Live Football Score.

A dramatic essence to a title-involving match. Liverpool needed a victory to keep the pressure on Premier League table-toppers and a relentless Manchester City. Roberto Firmino put them ahead as early as the 16th minute. But despite their superior performance, Liverpool couldn’t add a second goal. Tottenham made them pay with Lucas Moura scoring the equaliser. But just when the match seemed to be destined for a draw, Mohamed Salah shows brilliant presence of mind to force Spurs into conceding a second. Alexander Arnold’s cross at the far post in nodded into the goal by Salah, Hugo Lloris spills it and the ball rebounds into the goal off Toby Alderweireld. Liverpool remains alive in the title race, Tottenham out.

Liverpool strolled to a comfortable 2-1 victory with one goal each from Georginio Wijnaldum and Roberto Firmino across both the halves. Eric Lamela could only manage a consolation goal in extra-time. The victory helped Liverpool in maintaining a perfect unbeaten start to the Premier League, which proved to be the greatest ever title race fight between two teams.

Both Liverpool and Tottenham Hotspur are out of Premier League title race but the race for the Champions League spots is still on. The match ended in a 2-2 draw after Harry Kane spurned his first penalty and scored another from the last kick of the game. But the game was of a certain Mohamed Salah. The Egyptian enjoying his best ever season scored in the third minute before nearly handing Liverpool a victory with an amazing extra-time goal.

Liverpool has still not signed Virgil Van Dijk and hence their defensive fragilities are ominous. Tottenham exploits it ruthlessly to thrash the Reds. Harry Kane scored twice, both coming after defensive lapses from Dejan Lovren. Son Heung Min and Dele Alli scored the other two goals for the Spurs. Mo Salah scored the lone goal for Liverpool.

The Premier League season 2016-17 is approaching its end. Tottenham Hotspur are second and have a slight chance at the title, while Liverpool are fifth and need a victory to break into the top-four. But a Sadio Mane brace inside the opening 20 minutes put Liverpool towards a comfortable victory. Mane had just returned from injury and showed why in two years’ time he would be among the world’s best forwards of the game.

Liverpool finished second in the 2018-19 Premier League losing the title by a single point to eventual winners Manchester City. The title race was the best and the most nerve wrenching title race battle ever in the Premier League. Tottenham Hotspur finished fourth but a staggering 26 points behind their Champions League final opponents.

(The above story first appeared on LatestLY on Jun 01, 2019 04:59 PM IST. For more news and updates on politics, world, sports, entertainment and lifestyle, log on to our website latestly.com).