UEFA Champions League: Who Will Barcelona, Manchester City, PSG and Other Teams Face in Quarter-Finals of UCL 2019–20 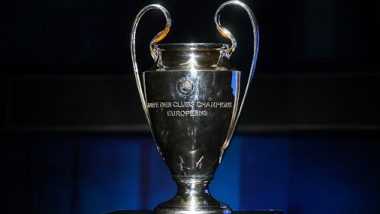 UEFA Champions League returned to action for the first time this week since March as the competition resumed this week following the coronavirus enforced suspension. Before the break, PSG, Atalanta, Leipzig and Atletico Madrid had already booked their place in the quarter-finals of the competition with Barcelona, Bayern Munich, Manchester City and Lyon securing their place in the last eight this week. Lionel Messi’s Incredible Goal Leads Barcelona to a 3-1 Win Against Napoli in Champions League 2019-20 (Watch Video).

Due to the effects of coronavirus pandemic, UEFA have made changes in the competition's format for this season. All the games from quarter-finals onwards will be one-off ties played in Lisbon Portugal instead of the traditional two-legged affairs. So with eight teams looking to become European champions this season, many for their first time, here is a look at the fixture list for UCL 2019-20 Quarter-Finals. Robert Lewandowski Leads Bayern Munich to a 4-1 Win Against Chelsea.

(The above story first appeared on LatestLY on Aug 09, 2020 02:19 PM IST. For more news and updates on politics, world, sports, entertainment and lifestyle, log on to our website latestly.com).