Villarreal vs Manchester United match UEFA Europa League 2020-21 final will be played at the PGE Arena Gdansk on May 27, 2021 (Wednesday) mid-night. The game is scheduled to begin at 12:30 am IST (Indian Standard Time). 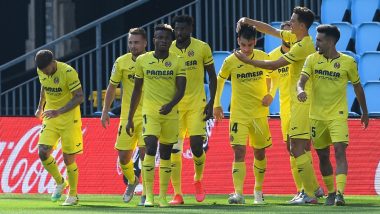 Manchester United have the chance to break their trophy draught when they take on Villareal in the finals of the Europa League in Gdansk. The Red Devils finished second in the Premier League with Ole Gunnar Solskjaer producing a much improved season with his young team. Although they remain a work in progress, a win against the Yellow Submarines is bound to lift the mood of the fans and owners alike. Opponents Villareal are a descent team, managed well by former Arsenal gaffer Unai Emery. He is a some sort of an expert when it comes to this competition as he is in his fifth final in eight seasons. Unai Emery will know thing or two about Ole Gunnar Solskjaer and his men and that sets up for a fascinating clash. Bruno Fernandes, Marcus Rashford, Paul Pogba & Other Members of Manchester United Sweat It Out Ahead of Europa League 2020-21 Finals Against Villareal (See Pics).

Juan Foyth is struggling to be fit in time for the finals but there is good news too for Villareal as Samu Chukwueze is set to feature after recovering from his injury. Veteran midfielder Dani Parejo will be the tireless runner in midfield with Etienne Capoue his partner in a 4-4-2 formation. Paco Alcacer and Gerard Moreno form the front two for the club.

Skipper Harry Maguire is not fit to play in the finals and it will be down to Eric Bailly and Victor Lindelof to lead the backline. Edinson Cavani is in fine form at the moment and will play the lone striker role with Bruno Fernandes behind him. Paul Pogba should start alongside Scott McTominay in the holding role. In goal, David De Gea is set to get the nod ahead of Dean Henderson. VIL vs MUN Dream11 Prediction in UEL Final 2020–21: Tips To Pick Best Team for Villareal vs Manchester United Football Match.

Villarreal vs Manchester United match UEFA Europa League 2020-21 final will be played at the PGE Arena Gdansk on May 27, 2021 (Wednesday mid-night). The game is scheduled to begin at 12:30 am IST (Indian Standard Time).

Those unable to follow the match live on television can watch the Villarreal vs Manchester United Final clash online. SonyLiv, the OTT of Sony Network, will be live streaming the first leg of the Final match online for fans in India. Manchester United will dominate the game from the onset and if they remain composed in front of the goal, expect the English club to lift the trophy.

(The above story first appeared on LatestLY on May 26, 2021 01:17 PM IST. For more news and updates on politics, world, sports, entertainment and lifestyle, log on to our website latestly.com).