Zlatan Ibrahimovic Takes a Sly Dig at Romelu Lukaku, Labels Himself as ‘God of Milan’ After A Brace Against Inter Milan; Watch Goal Highlights 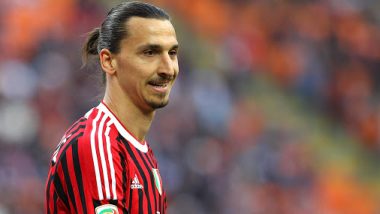 Zlatan Ibrahimovic made an epic comeback after being down with COVID-19 as he scored a brace against Inter Milan at the San Siro in Serie A 2020-21.  He led AC Milan to a stunning 2-1 win and post this, the former LA Galaxy player took to social media and labelled himself as the God of Milan.  . He further shared a snap of himself hugging the team. Team AC Milan had earlier trolled Inter Milan and said that they have been Zlataned. With this, he took a sly dig at Romelu Lukaku who had called himself the king of Milan. AC Milan kept up with their winning streak in the Serie A 2020-21. The team is now on number one of the Serie A 2020-21 points table with 12 points in their kitty. AC Milan Hilariously Trolls Inter Milan After a 2-1 Win as Zlatan Ibrahimovic Scores a Brace, Says ‘Inter You’ve Been Zlataned’.

Right from the start of the game, Zlatan looked as if he wanted to score for the team and he did not. In the first goal, he missed a penalty and the ball bounced back to him and, the former LA Galaxy player did not leave this opportunity and netted a goal at the 13th minute, Three minutes later, he once again netted a goal and took the team to 0-2. After the game, he went on to label himself as the God of Milan. Long Ago, Lukaku had called himself the new king in town and Zlatan obviously remembered that. Thus he labeled himself as the God of Milan. First, we shall have a look at the goal highlights and then the post by Zlatan.

Milano never had a king, they have a GOD

With this, Zlatan is on number one of the Serie A 2020-21 points table. The team would be hoping to continue with their winning streak for the rest of the season.

(The above story first appeared on LatestLY on Oct 18, 2020 11:34 PM IST. For more news and updates on politics, world, sports, entertainment and lifestyle, log on to our website latestly.com).