Zlatan Ibrahimovic is known for his tongue in cheek comments. 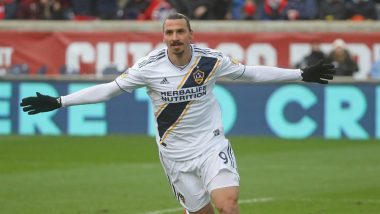 Zlatan Ibrahimovic is known for his tongue in cheek comments. His statements have always been the topic of discussion amongst his fans and very often the LA Galaxy striker is heard trolling the opponents as well. This time it was his agent Mino Raiola who was on his radar and was trolled by Ibra.

A few hours ago, Zlatan posted a picture on social media where his manager was seen standing on his back as a part of a gym routine to stretch out the muscles. Raiola, on the other hand, was seen holding onto the wall to keep his balance. What caught our attention was the caption of the snap which read, “When your agent tries to squeeze every last penny out of you.”

A post shared by Zlatan Ibrahimović (@iamzlatanibrahimovic) on Aug 5, 2018 at 1:57pm PDT

The former Manchester United player has been in a terrific form ever since he has signed up with LA Galaxy. Recently, Zlatan scored his first hattrick for the club against Orlando City which helped the team win the match by 4-3. So far, Ibrahimovic has 15 goals in 17 games so far for his new side. A few days ago, he was asked how he has changed the football culture in USA to which he replied, "I don't know if I changed it, I just keep doing my job. They're lucky I didn't come 10 years ago because I would be the President today." Recently, Zlatan and Cristiano Ronaldo missed out on the MLS All-Star Game which featured one of the world's most storied clubs.

(The above story first appeared on LatestLY on Aug 06, 2018 09:36 AM IST. For more news and updates on politics, world, sports, entertainment and lifestyle, log on to our website latestly.com).