PKL 2019 Results: Bengaluru Bulls Climbs to Third with a 47–26 Victory Against Telugu Titans 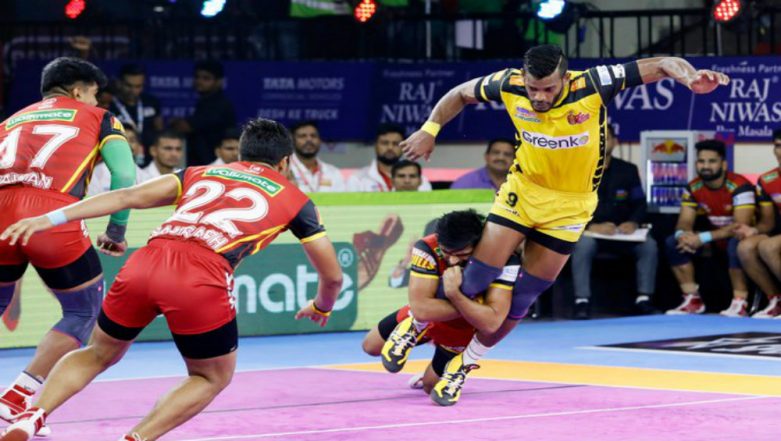 With this victory, their third in a row, Bengaluru climbed to third place in the points table, just a point behind league leaders Dabang Delhi.

Pawan scored 17 points against the Titans in Thursday's contest. The star raiders on both teams were off to a fine start with Rohit Kumar and Pawan combining to score their team's first three points, while Siddharth Desai answered with a couple of his own for Telugu Titans.

Desai's two-point raid in the third minute left Bengaluru with just two men on the mat, but a brilliant super tackle by Pawan followed by a successful raid helped his team regain momentum.

Pawan added a couple of more points to his tally, which reduced Titans down to just three men on the mat, but they super-tackled Rohit to cut their deficit down to 2. A couple of two-point raids in succession by Pawan and Rohit helped Bengaluru inflict the game's first all-out and give themselves a nine-point cushion.

The Titans responded strongly as Armaan scored the first super raid of the night, but three straight successful raids by Bengaluru negated the effect of that effort as the teams headed into the half-time with Bengaluru leading 21-14.

The Titans' defence started the second half by pinning down Rohit, but what followed was a run of four successive points for Bengaluru that left Titans with just a solitary man on the mat.

Bengaluru defence made no mistake in tackling the raider and inflicting a second all-out on Titans.

Titans then reduced their opponents to just three on the mat through a few quick raids. But a super tackle by Mahender Singh followed by a two-point raid by Pawan put Bengaluru in the lead by 14 points.

Titans then managed to reduce Bengaluru down to just three men, but a spell of four super tackles in four minutes by the Bengaluru defence not only kept the all-out at bay, but also increased their lead to 20 points with under three minutes left in the contest.

Mahender wrapped up his stellar performance by scoring his seventh tackle point of the night right before the final whistle, which confirmed a third straight win for Bengaluru Bulls.