Hamilton was involved in a collision with Verstappen following which the Dutchman was hospitalised. After the win, he was abused racially on social media. 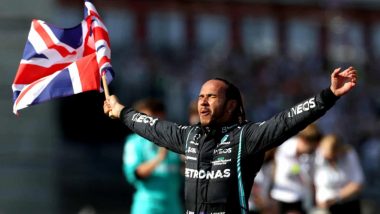 Lewis Hamilton, who won the British Grand Prix on Sunday, was subjected to racial abuse on social media following his victory. Hamilton received a 10-second penalty but overcame that to record his eighth win after he was involved in a shocking collision with rival Max Verstappen in the very first lap of the race. Verstappen fortunately looked alright post the incident and was able to walk to the ambulance to go to the hospital for further tests. Reports state that there were several people who commented with monkey emojis on Mercedes' Instagram post after Hamilton's win. Lewis Hamilton Wins British Grand Prix 2021 After Horrific Collision With Max Verstappen, Check Post

Condemning this racial abuse on social media, a joint statement was released by Formula One, FIA and Mercedes on Monday. It read, "During, and after, yesterday's British Grand Prix, Lewis Hamilton was subjected to multiple instances of racist abuse on social media following an in-race collision. Formula 1, The FIA and Mercedes-AMG Petronas F1 Team condemn this behaviour in the strongest possible terms. These people have no place in our sport and we urge that those responsible should be held accountable for their actions. Formula 1, the FIA, the drivers and the teams are working to build a more diverse and inclusive sport, and such unacceptable instances of online abuse must be highlighted and eliminated."

Hamilton, who in the past has publicly voiced his opinion against racism, had supported England footballer Bukayo Saka after the latter bashed social media companies of not taking enough strict action to combat online racism. Saka along with Marcus Rashford and Jadon Sancho had missed penalties in the Euro 2020 final which Italy won and post that, the trio were racially abused online.

(The above story first appeared on LatestLY on Jul 19, 2021 02:37 PM IST. For more news and updates on politics, world, sports, entertainment and lifestyle, log on to our website latestly.com).