International javelin throw player Maria Goroti Khalkho of Ranchi is today battling against huge financial debt and lung disease. She did not even get married as she had dedicated her entire life to her sport. 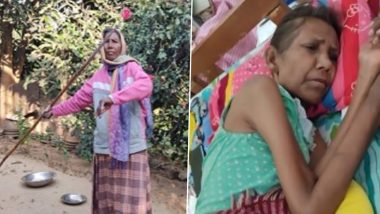 Ranchi, June 28 : International javelin throw player Maria Goroti Khalkho of Ranchi is today battling against huge financial debt and lung disease. She did not even get married as she had dedicated her entire life to her sport. In 1970s, she won several gold and silver medals participating in a dozen national and international competitions. After competing at the highest level, she spent nearly 30 years of her life training other athletes for javelin throw. Today, she is gasping for breath due to a lung disease and is completely bed-ridden that she needs support to even walk. Thomas Dennerby, India U17 Women's Team Coach, Says 'Girls Need To Play Enough Matches Before U17 World Cup'.

Sadly, a reputed athlete of her era does not even have money to buy medicines and food for herself today. Maria currently lives at her sister's house in Namkum area of Ranchi. Her sister's financial condition is not good as well. In the last couple of months, her health has deteriorated in a way that the arms, which had once shown resolute strength in the sports arena, are no longer strong enough to lift even a glass of water. When IANS had published a report on Maria's illness and poor financial condition in February, the Jharkhand Sports Department took note of her condition and provided her an immediate assistance of Rs 25,000.

Earlier, the department had provided a financial help of Rs one lakh from the Players' Welfare Fund to help Maria fight her illness but this amount was soon exhausted due to expensive medicines and treatment. The 64-year-old former athelete does not even receive old age pension. The doctors have advised Maria to drink milk, eat eggs and nutritious food, but when she can't afford two square meals a day, then how will she buy nutritious food? Every month more than Rs 4,000 is spent on medicines only. Since the onset of the lung disease, Maria reels under a debt of more than Rs 1 lakh. Torneo Female Football Tournament: India U-17 Women’s Football Team Goes Down to Mexico.

Since her childhood, Maria wanted to become an athlete. In 1974, when she was a student of class 8, she won a gold medal in the national-level javelin meet. She also won the gold medal in javelin throw at the All India Rural Summit. In 1975, she won the gold medal in national school competition held in Manipur. In 1975-76, when the International Javelin Meet was organised in Jalandhar, Maria again won a gold medal. In 1976-77 too, she proved her mettle in many national and regional competitions. In 1980s, she turned to coaching. From 1988 to 2018, she served as a coach at the Government Training Centre at Mahuadanr in Latehar district of Jharkhand on a salary of Rs 8,000 to 10,000 per month.

The job was contractual, so even after retirement Maria was left with almost no money. Many athletes like Yashika Kujur, Ambresia Kujur, Pratima Khalkho, Reema Lakra, who have learned the techniques of throwing javelin from Maria, have won medals in many competitions in the country and abroad. Jharkhand Grappling Association chief Praveen Singh says that despite the state government making several announcements for helping former sportspersons, no concrete plan could be made to help them. When the media raises the plight of such sportspersons only then they might get necessary help, Singh adds.

(The above story first appeared on LatestLY on Jun 28, 2022 11:12 AM IST. For more news and updates on politics, world, sports, entertainment and lifestyle, log on to our website latestly.com).