The India U-17 women's team suffered a 0-2 defeat against Mexico U-17 in their last match of the sixth Torneo Female Football Tournament in Vilesse, Italy. 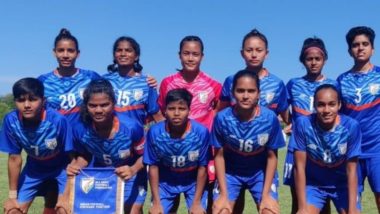 New Delhi, June 27: The India U-17 women's team suffered a 0-2 defeat against Mexico U-17 in their last match of the sixth Torneo Female Football Tournament in Vilesse, Italy. Mexico netted one in each half to wrap up the match, with Katherin Sillas and Alice Gallegos getting on the scoresheet on Sunday night. It was a rather frantic start to the game in the opening exchanges, as both sides looked to settle down to a good rhythm. Mexico edged the opening exchanges in terms of creating chances, but India also had efforts of their own. Neymar Transfer News: Brazilian Star Considering PSG Exit This Summer.

India custodian Melody Chanu was called into action early on, as she often came off her line to punch Mexican crosses and corners away from danger. She was again called into action on the 14th minute, when she came off her line to produce another save, but Katherin Sillas was present to turn the rebound into the net. India looked to pounce on the break and Anita Kumari did just that in the 20th minute, latching on to a stray clearance, before darting up the pitch into the Mexican third. However, she soon ran out of passing options, as she had to turn back and recycle the ball to her own defence.

Neha looked lively on the left, as she dummied her marker to find some space, before sending in a cross that was headed wide by Anita on the 26th minute. Sillas had another chance from the left that she put wide on the 28th, before Giselle Espinoza sent her free-kick from long range into Melody's hands. With less than five minutes of the first half left on the clock, Neha again broke down the left, this time, her cross evading Anita and Kajol D'souza. The first half came to an end as Mexico took their slender lead into the dressing room, as India came out with a change -- Sudha Ankita Tirkey replacing Kajal. East Bengal’s Tie-Up Meeting With Sponsors Emami Group After July 1: Club.

India soon had a chance from a free kick around 30 yards out, as defender Purnima Kumari lined up her shot. However, her effort went over the cross-bar. Minutes later, India custodian Melody Chanu was once again called into action as she came off her line to produce a diving save. With less than 10 minutes left on the clock, Shubhangi Singh surged up the pitch to create a decent chance for India, as she passed the ball to Anita, whose cross was a little ahead of Neha, as the latter was robbed of the ball. India head coach Thomas Dennerby threw caution to the wind making a double substitution to bring on Misha Bhandari and Pinku Devi in place of Naketa and Nitu Linda, with just a few minutes left on the clock. However, Mexico soon scored in the third minute of added time through Alice Gallegos to secure the victory.

(The above story first appeared on LatestLY on Jun 27, 2022 12:04 PM IST. For more news and updates on politics, world, sports, entertainment and lifestyle, log on to our website latestly.com).