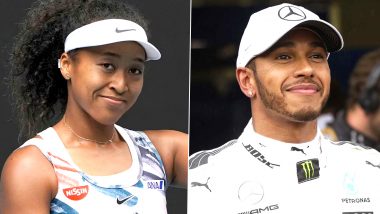 TIME 100 has revealed its annual list of most influential people on September 22, 2020. TIME 100 is an annual listicle of the 100 most influential people in the world, assembled by the American news magazine Time. This time they have featured people from the entertainment too and considering the ongoing coronavirus pandemic situation the listicle also include names of doctors, nurses and health officials. From sports, Naomi Osaka and Lewis Hamilton have made it to TIME 100 Most Influential People list. Surprisingly, no Indian sports personality made it to the list. However, from India Prime Minister Narendra Modi and Bollywood actor Ayushmann Khurrana made it to TIME 100 2020 list. TIME 100 Most Influential People 2020: Ayushmann Khurrana Is The Only Indian Actor To Make It To The TIME’s 100 List This Year!

Without a doubt, Naomi Osaka and Lewis Hamilton are amazing sports personality. Osaka is a Japanese tennis player who currently ranks at no 1 position by the Women's Tennis Association. She is the first Asian tennis player to hold top rank in singles. Speaking about Lewis Hamilton, the British racing driver is six-time Formula One World Champion and currently competing in Formula One for the Mercedes-AMG Petronas Formula One Team. Naomi Osaka Reacts After Defeating Victoria Azarenka in US Open 2020 Finals, Twitter Goes Berserk Congratulating Japanese Tennis Ace.

It is a shocking fact that Indian sports talent like Virat Kohli, MS Dhoni, PV Sindhu and others who have done well in recent times in their respective fields did not feature in the list. It is indeed a disappointment for Indians. Let us check the TIME 100 2020 list below.

Introducing the 2020 #TIME100 featuring the pioneers, artists, leaders, icons and titans who have had the most impact this year https://t.co/FA12jF1B2P

US President Donald Trump and China's President Xi Jinping also feature in TIME 100 200 lists of influential people. America politician Kamala Harris also made it to the list. Apart from Lewis Hamilton and Naomi Osaka, we expected more names from sports on the list.

(The above story first appeared on LatestLY on Sep 23, 2020 09:37 AM IST. For more news and updates on politics, world, sports, entertainment and lifestyle, log on to our website latestly.com).