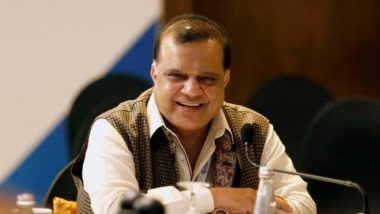 New Delhi, June 24: The Delhi High Court on Friday ordered Indian Olympic Association (IOA) president Narinder Batra to step down immediately from his post. A vacation bench of Justice Dinesh Sharma stated that the illegal post of life president or life member cannot be the stepping stone for any other position or benefit elsewhere, be it nationally (including in the Indian Olympic Association) or in international bodies. Ramiz Raja, PCB Chairman, Says He Is No More in Contact With Former Pakistan Prime Minister Imran Khan.

"If R-3 (Batra) has so benefited, then such benefit or position shall end right away. Let the CoA look into the matter, so would the Government of India," Justice Sharma said in the order. After the Delhi High Court order, Anil Khanna, the senior-most vice president of the body will be the new acting president of IOA. The order of the court was following a contempt petition moved by former hockey player Aslam Sher Khan-- who was a part of the winning team that won the gold medal in the 1975 Hockey World Cup.

On May 25, the Delhi High Court had held that Hockey India has violated the National Sports Code and constituted a three-member Committee of Administrators (CoA) to run its day-to-day affairs. The court had also removed Batra's 'life time' member position on the plea pointed out the posts of 'Life Member', 'CEO' and 'Life President' have been created by Batra, being in blatant contravention of the NSCI, Circular 1975 and 2001 Guidelines, as illegal and unsustainable. In the earlier order, it was stated that the respondent Batra knew fully well that the post of Life President and Life Member in a NSF is illegal, and had been specifically intimated so by the government. India Played Its First-Ever Test Match On This Day in 1932.

Yet when Hockey India was registered under the Societies Registration Act 1860, on May 28, 2009 and was granted prompt recognition by the government, within a couple of days thereof, the respondent went ahead and had himself appointed as Life Member of Hockey India. "This smacks of brazen impertinence to the clear mandate of law. It was a less than honest but futile endeavour to institutionalise oneself in a body whose legitimacy itself is contingent upon conformity with the Sport Code and the law. What a paradox, to make oneself permanent in an entity whose tenure itself is impermanent.

"The illegal Post of Life President or Life Member cannot be the stepping-stone for any other position or benefit elsewhere, be it nationally (including in the Indian Olympic Association) or in international bodies. If the respondent has so benefitted, then such benefit or position shall end right away. Let the CoA look into the matter, so would the Government of India," the order read.

(The above story first appeared on LatestLY on Jun 25, 2022 11:38 AM IST. For more news and updates on politics, world, sports, entertainment and lifestyle, log on to our website latestly.com).