Chopra won gold medals at the 2018 Commonwealth Games and Asiad making him the first to win gold in both events on debut. He is also the first to win gold at CWG in javelin. After a stupendous 2018, Chopra was ruled out for the entire 2019 season due to an elbow injury. He returned earlier this year and secured qualification for Tokyo Olympics. 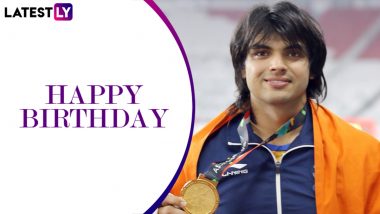 India’s track and field athlete Neeraj Chopra celebrates his 23rd birthday on December 24, 2020 (Thursday). He is already a gold medallist at the Asiad and Commonwealth Games and is seen as the best of the future generation sportspersons from the country. Chopra burst into limelight after winning the 2016 IAAF World U20 Championships where he set a new world junior record by achieving a distance of 86.48m. Since then he has only gone to achieve newer heights and is one of youngest biggest medal hopes from next year’s Tokyo Olympics. As Chopra celebrates his 23rd birthday, take a look at some quick facts about him. Year Ender 2020: Novak Djokovic’s Moment of Madness, Naomi Osaka’s Silent Fight Against Racial Injustice and Other Top Tennis Moments From This Season.

Born in Haryana, Chopra was attracted to javelin after watching his peer Jaiveer practise at the Panipat Stadium where Chopra was training in cricket. Neeraj immediately shifted his focus to javelin and first represented India at the 2013 World Youth Championship where he was out of the qualification round. But the young lad came back roaring and set a national record at the South Asian Games three years later with an82.23m throw and a gold medal win.

Chopra next participated at the 2016 IAAF World U20 Championships in Poland and once rewrote the records with an 86.48m throw. He had, this time, created a new junior world record while also rewriting his own personal best and the national record. Chopra has since rewritten the national record thrice and currently holds it at 88.06m, which he achieved at the 2018 Asian Games. Take a look at some lesser-known or quick facts about him.

Chopra won gold medals at the 2018 Commonwealth Games and also at the Asian Games making him the first-ever to win top honours in both events on debut. He is also the first to win gold at CWG in javelin. After a stupendous 2018, Chopra was ruled out for the entire 2019 season due to an elbow injury. He returned earlier this year with the Athletics Central North East tournament and secured his place at next year’s Tokyo Olympics with an 87.86m throw.

(The above story first appeared on LatestLY on Dec 24, 2020 08:00 AM IST. For more news and updates on politics, world, sports, entertainment and lifestyle, log on to our website latestly.com).