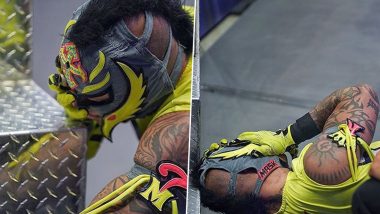 Rey Mysterio eyeball popped out during the 'Eye For an Eye' match against Seth Rollins at WWE Extreme Rules 2020. Monday Night Messiah won this match after damaging eyeball of Master of 619. Rollins on seeing Mysterio condition near ringside even started vomiting. After this incident, Rey Mysterio was immediately treated by the medical staff and rushed to the local hospital. WWE medical staff our optimistic for Rey maintaining his eye vision. It must also be noted that last-minute changes were made to Seth Rollins vs Rey Mysterio match at 'Horror Show at Extreme Rules'. Rey Mysterio's Eye Pops Out During Extreme Rules 2020 'Eye For an Eye' Match, Seth Rollins Vomits at Ringside (Watch Video)

Initially, WWE had planned to taped match with CGI effects that would show Rey’s eye coming out of its socket. However, WWE chose to do a regular match but they left things open-ended and said that they may be able to save Rey’s eye. An important thing to be noted that Rey's injury is just a storyline angle as Master of 619 is yet to sign a new contract with WWE. A small amount of blood and the fake eyeball was used during the match which also added the drama of Seth Rollins vomiting in the end. After the match, WWE provided an update on Mysterio's condition stating that 'If the optic nerve is not severed and there is not too much strain on the blood vessels and nerves that connect the eye to the rest of the head, there’s a chance Mysterio can maintain his vision'. WWE NXT July 22, 2020 Results and Highlights: Keith Lee Relinquishes North American Title; Karrion Kross Defeats Dominik Dijakovic to Continue His Winning Streak (View Pics)

Seth Rollins in the recently-concluded episode of Raw blamed Mysterio for bringing out the evil within him. This feud between Rollins and Mysterio is not ending soon as WWE has something exciting in store for us where we could even see Rey's son Dominik Mysterio in action.

(The above story first appeared on LatestLY on Jul 23, 2020 01:07 PM IST. For more news and updates on politics, world, sports, entertainment and lifestyle, log on to our website latestly.com).