Australian Open 2022: From Ashleigh Barty to Naomi Osaka, 5 Players To Watch Out for in Women’s Singles Draw in Melbourne

The women's singles category is set for some tough competition this year in the Australian Open. Naomi Osaka is the defending champion and she would eye a third Australian Open title, something can be possible but for sure, would not be easy! 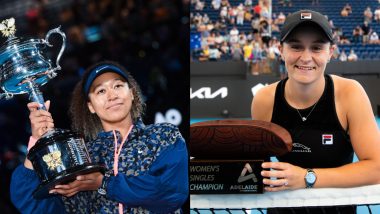 The Australian Open 2022 is just a few days away and tennis fans would once again be treated to some exciting action when some top names of the game go up against each other to get their hands on the first major of the year. Last year, the competition was held in February, the delay happening due to COVID-19 but this time, the stage is set for the action to resume at Melbourne Park from January 17. When Is Australian Open 2022? Get Live Streaming in IST, Top Seeds and Other Details About the First Major of the Year

This year, there seem to be grounds for intense competition in the women's singles category. Naomi Osaka won the title last year by beating Jeniffer Brady in straight sets and would have some tough opponents to deal with this time. In this article, we shall take a look at the top five players to watch out for in the women's singles category at the Australian Open 2022:

The British teen is one of the fastest rising stars in the sport, a testament to this fact being her spectacular US Open title win last year. The youngster has grown from strength to strength and has only tried to get better with every passing competition. Now, she is set to compete in her maiden Australian Open and she would try her best to replicate the success she had last year. Her recent form is not good though, as she lost to Elena Rybakina in the Round of 32 in the Sydney International, just three days ago. But there can be no doubt regarding her talent.

In a list like this, it is difficult not to mention Naomi Osaka for long. The Japanese, who is the current title-holder would eye a fifth Grand Slam title when she competes in the Australian Open this year. Osaka had pulled out of the French Open last year and also did not compete in the Wimbledon but she is ready to begin the new year on a high. If she successfully defends her major title, then she would become the first women's singles player to do so since Serena Williams in 2016. For the record, Osaka has already has two Australian Open titles to her name.

The local star is a strong contender for the title this year and would be heading into the competition on a very positive note after clinching the Adelaide International 2022 title a few days ago. Barty has been one of the most consistent performers in recent times and she would be targetting to make it to the Australian Open 2022 final (for the first time) and potentially mount a strong title challenge. The top seed has had a good start to 2022 and it would be interesting to see if she can maintain that momentum.

The Romanian, who is a former world number one, has gained confidence ahead of the Australian Open after defeating Veronika Kudermetova to win the Melbourne Summer Set 1 title a few days ago. A title win would give her a big boost ahead of the year's first major. Halep had reached the semifinal of this competition in 2020 where she was defeated by Garbine Muguruza. In 2021, she had crashed out in the quarterfinals with a straight-set defeat to Serena Williams. Now, she is back in form after a calf injury last year as she aims to add a third Grand Slam title to her trophy cabinet.

Aryna Sabalenka is a force to reckon with in the competition but form has not been on her side. The world number two faced two first-round defeats in the competitions leading up to the Australian Open and that is something she would be eager to put behind her as soon as possible. Despite poor form, Sabalenka is one of the contenders for the title and she would be keen on starting to win matches as soon as possible.

A notable mention has to be made of Garbine Muguruza. The 2020 finalist and former world number one is also one of the big names to watch out for in women's singles at the Australian Open. The Spaniard is heading to the competition as currently number three in the world. Her last outing was in the quarterfinal of the Sydney International, where she was defeated by Daria Kasatkina. Nonetheless, she has had a decent 2021 behind her and would be looking to maintain that momentum in Melbourne.

(The above story first appeared on LatestLY on Jan 14, 2022 01:36 AM IST. For more news and updates on politics, world, sports, entertainment and lifestyle, log on to our website latestly.com).