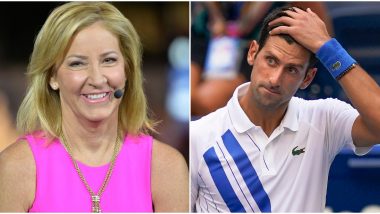 American Tennis great Chris Evert called out Novak Djokovic for making a clumsy statement following his straight-sets defeat to Rafael Nadal in the men’s singles French Open 2020 final on Sunday. Djokovic lost 0-6, 2-6, 5-7 as Nadal clinched his 13th French Open title and equalled Roger Federer’s record of 20 Grand Slam titles. The final at Roland Garros was the 56th meeting between these two tennis giants and Djokovic, who had earlier in the week described Nadal as his greatest rival in a classy tribute to the Spaniard went to state that their rivalry was the ‘biggest’ in the history of the sport. He was, however, corrected by Evert, who shared an iconic two-decade rivalry with Martina Navratilova on the WTA Tour. Rafael Nadal vs Novak Djokovic VIDEO HIGHLIGHTS: Rafa Matches Roger Federer's Record of 20 Grand Slam Titles After Beating Djokovic in French Open 2020 Final.

Speaking at the presentation ceremony post his humiliating defeat in less than three hours, Djokovic called Nadal the “King of Clay” before going on to describe the rivalry they have shared over the years. "I've played (Nadal) more than I (have) played any other player in my professional career. Our head-to-head is the biggest head-to-head ever in the history of the sport... he's definitely my greatest rival," Djokovic said. Rafael Nadal Wins French Open 2020: Roger Federer Congratulates ‘Greatest Rival’ for Equalling His Record of Most Grand Slam Titles.

Evert, an 18-time Grand Slam winner, was, however, quick to point out that maybe the Serbian was referring to men’s tennis as in the history of the sport her rivalry with Martina Navratilova is one of the greatest rivalry of all-time spanning over two decades and 80 matches. “Well, true... in men’s tennis... @Martina and I played 80 times,” she wrote on Twitter quoting a post from ATP Tour which had mentioned Djokovic’s statement.

Navratilova, also an 18-time Grand Slam champion, shared an iconic rivalry with American Evert. They met a record 80-times in the WTA tour from 1973 to 1986 with Navratilova leading the head-to-head records 37-43. Her tweet was also mentioned by 12-time Grand Slam winner Billie Jean King, who also reminded everyone that Evert and Navratilova faced each other 80 times.

Evert also took another dig at Djokovic’s statement and called him out by stating “When will men think before they tweet powerful statements once again overlooking women????”. Tennis broadcaster Catherine Whitaker also joined in the conversation and replied: “If I could like this tweet more than once then I sure as heck would.”

When will men think before they tweet powerful statements once again overlooking women???? https://t.co/H5GNVjDX7q

Meanwhile, Nadal became the second men’s tennis player after Roger Federer to win 20 Grand Slam titles. The thrashing win over Djokovic was also his 100th win at Roland Garros. For Djokovic, it ended his hopes of an 18th Grand Slam title and also the history of becoming the first man since Rod Laver to win all four majors at least twice.

(The above story first appeared on LatestLY on Oct 12, 2020 09:07 AM IST. For more news and updates on politics, world, sports, entertainment and lifestyle, log on to our website latestly.com).