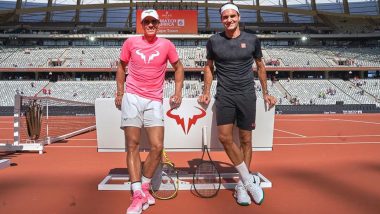 Rafael Nadal is on the receiving end of massive praises after lifting the French Open 2020 title. On the occasion, Swiss tennis legend Roger Federer also took to his Twitter account and congratulated Nadal for equalling his record of most Grand Slam titles (20). The Spaniard defeated World No. 1 Novak Djokovic 6-0, 6-2, 7-5 at Court Philippe Chatrier in Roland Garros to win his 13th French Open title. Enthralled by the 34-year-old’s emphatic performance, Federer hailed Nadal as his ‘greatest rival’ and called his dominance at Roland Garros ‘incredible.’ For the unversed, the Spanish star has won 100 out of 102 at the historic venue. Rafael Nadal Thrashes Novak Djokovic to Win French Open 2020, Netizens Hail Spanish Tennis Star as GOAT.

“I have always had the utmost respect for my friend Rafa as a person and as a champion. As my greatest rival over many years, I believe we have pushed each other to become better players. Therefore, it is a true honour for me to congratulate him on his 20th Grand Slam victory. It is especially amazing that he has now won Roland Garros an incredible 13 times, which is one of the greatest achievements in sport,” Federer wrote on the micro-blogging website. Rafael Nadal vs Novak Djokovic VIDEO HIGHLIGHTS.

“I also congratulate his team, because nobody can do this alone. I hope 20 is just another step on the continuing journey for both of us. Well done, Rafa. You deserve it,” he added.

Federer didn’t take part in the Grand slam event as he’s still recovering from his knee injuries which he sustained earlier this year. Though the Swiss maestro has announced to return next year, it will be interesting to see how the 39-year-old will perform. On the other hand, the ‘King of Clay court’ is at his prime and will like to surpass Federer to become the lone holder of most Grand Slam titles.

(The above story first appeared on LatestLY on Oct 11, 2020 11:52 PM IST. For more news and updates on politics, world, sports, entertainment and lifestyle, log on to our website latestly.com).