World No 6 Stefanos Tsitsipas downed Roberto Bautista Agut to win the Mallorca Championships and his first tour-level title on the grass-court, here on Saturday. 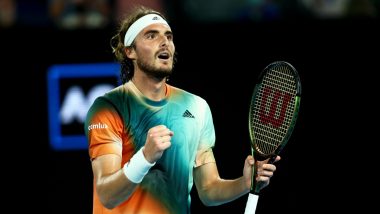 Mallorca (Spain), June 25 : World No 6 Stefanos Tsitsipas downed Roberto Bautista Agut to win the Mallorca Championships and his first tour-level title on the grass-court, here on Saturday. In a topsy-turvy encounter, Tsitsipas was broken when serving for the match at 5-3 in the deciding set, but the Greek held firm to claim a thrilling 6-4, 3-6, 7-6(2) win and clinch the ninth tour-level title of his career. The second seed was clinical with his opportunities at key moments to prevail after two hours and 31 minutes. Wimbledon 2022 Draw: Novak Djokovic May Meet Young Star Carlos Alcaraz in Quarters; Rafael Nadal Has Felix Auger-Aliassime in His Way.

"It looks like I'm playing longer matches on grass than I do on clay," joked Tsitsipas in his on-court interview. "This was an incredible fight and an incredible battle. I know it can be difficult for one person to deal with the loss, but I think for tennis it is great that we are able to play at this high level and show our sport at its limits," he added. It is a Tour-leading 40th win of the season for Tsitsipas, who also lifted the trophy at the Monte-Carlo Masters in April. As well as Bautista Agut, the Greek moved past Ilya Ivashka, Marcos Giron and Benjamin Bonzi this week to improve his career record on grass to 14-10, and his run in Mallorca also lifts the Greek one spot to No 5 in the ATP Live Rankings.

Tsitsipas came out firing in the early stages and the Greek's aggressive play earned him a 4-0 lead as Bautista Agut struggled to settle in front of an enthusiastic home crowd. Although the Spaniard was able to regain his composure to reclaim one break, Tsitsipas found sufficient rhythm on serve to ease to the first set. Bautista Agut appeared in deep trouble when Tsitsipas broke again in the third game of the second set, but the situation appeared to bring freedom to the home favourite. The Spaniard reeled off five games in a row from 1-3, demonstrating the sort of clean hitting that earned him a quarter-final win over World No 1 Daniil Medvedev on Thursday, to roar back into the contest. Bautista Agut claimed the second set having struck 12 winners to just three from his opponent. Wimbledon 2022 Draw: Iga Swiatek, Karolina Pliskova, Serena Williams Drawn in Top Half; Emma Raducanu, Ons Jabeur in Bottom.

Despite the mid-match barrage from Bautista Agut, Tsitsipas was able to unlock the Spaniard's delivery again for a 3-1 lead in the deciding set. Although the Greek stuttered when serving for the title at 5-3, he dominated the deciding-set tie-break to extend his ATP Head to Head series lead over the Spaniard to 3-0. Bautista Agut was bidding for a second title of the year after he claimed the 10th ATP Tour crown of his career in Dubai in February. The Spaniard's run in his homeland this week improves his record for the 2022 season to 23-8.

(The above story first appeared on LatestLY on Jun 26, 2022 10:19 AM IST. For more news and updates on politics, world, sports, entertainment and lifestyle, log on to our website latestly.com).