The Norwegian Casper Ruud earned his first win against second seed Germany's Alexander Zverev 6-3, 1-6, 6-3 in the Miami Open on Wednesday (IST) to advance to a semifinal showdown against Argentine Francisco Cerundolo. 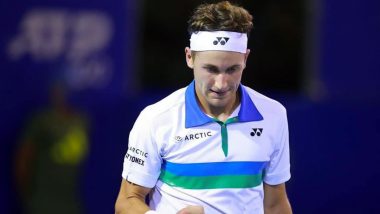 Miami, March 31: The Norwegian Casper Ruud earned his first win against second seed Germany's Alexander Zverev 6-3, 1-6, 6-3 in the Miami Open on Wednesday (IST) to advance to a semifinal showdown against Argentine Francisco Cerundolo. "It feels good and it means a lot. This is my first semifinal on hard courts, so that's a good feeling. I'm very happy to do it here in Miami," Ruud said.

"I've felt good the couple weeks I've been here practicing and the matches have felt very good. I want to of course keep going. Today was my toughest challenge yet of the tournament and on Friday will be another big one. I hope that I can take what I've learned from my three previous semifinals and bring it into Friday's match," he added.  Miami Open 2022: Iga Swiatek Beats Petra Kvitova, Enters Into Semifinals.

Now the 23-year-old will have a big opportunity against World No. 103 Cerundolo, who had never previously competed in a Masters 1000 main draw or won a tour-level match on hard court. This will be the pair's first ATP clash. When the Norwegian received treatment on his right foot, which he later said was because of taping on his toe, the momentum was firmly in Zverev's corner. Ruud never panicked, though.

"The second set I was feeling... some issues with the taping of my toe. I know it sounds a little bit silly maybe, but it was slipping off my toe, so it was a little uncomfortable to move," Ruud said. "It was great to get that break early on (in the third set) and I was able to keep it all the way out," Ruud told Tennis TV. "I was serving well. I can thank my serving for the win today."

(The above story first appeared on LatestLY on Mar 31, 2022 07:09 PM IST. For more news and updates on politics, world, sports, entertainment and lifestyle, log on to our website latestly.com).