Novak Djokovic Has No Plans To Get Vaccinated Against COVID-19, Could Miss US Open

Novak Djokovic is looking set for many more battles over his decision not to get vaccinated for Covid-19 and said he was ready to miss on tournaments and even Grand Slams. 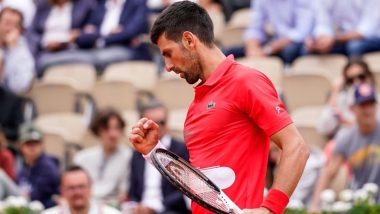 London, June 26 : Novak Djokovic is looking set for many more battles over his decision not to get vaccinated for Covid-19 and said he was ready to miss on tournaments and even Grand Slams. Djokovic, who was deported from Australia and not allowed to play in the year's first Grand Slam because he was not vaccinated, will be playing in Wimbledon starting on Monday but may miss the US Open as the organisers have indicated that they will not allow those un-vaccinated to participate. Rafael Nadal and Pregnant Wife Maria Perello Enjoy Quality Time Vacationing on Yacht (View Pic).

The winner of 20 Grand Slams titles tried to enter Australia in January on a medical exemption, which was rejected and his visa was subsequently cancelled. Djokovic was allowed to play the French Open last month, losing to Rafael Nadal in the quarterfinals, and will defend his Wimbledon title. Djokovic on Sunday revealed that he is still not vaccinated and would not be allowed to play in US Open as un-vaccinated foreign nationals are unable to enter the United States under current rules. Wimbledon 2022 Live Streaming Online on Disney+ Hotstar: Get Free Telecast Details of All England Lawn Tennis Championships on TV in India.

"As of today I am not allowed to enter the States under these circumstances," Djokovic said. "I am aware of that and that is an extra motivation to do well here, and hopefully I can have a very good tournament as I have done in the last three editions," he said. "Then I will just have to wait and see. I would love to go to the States. But as of today that is not possible," he said in an interview with talkSPORT, a sports radio station. "There is not much I can do anymore. It is up to the US government to make a decision whether or not they allow the un-vaccinated people to go into the country." Djokovic was asked if he will consider getting vaccinated, and he replied in the negative.

(The above story first appeared on LatestLY on Jun 27, 2022 08:20 AM IST. For more news and updates on politics, world, sports, entertainment and lifestyle, log on to our website latestly.com).