Nadal has now won nine trophies at the clay-court event in the Italian capital, a record in the history of the tournament. 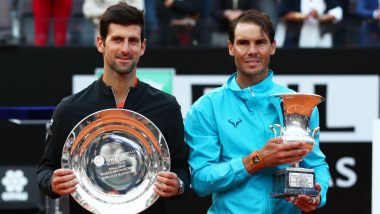 Nadal has now won nine trophies at the clay-court event in the Italian capital, a record in the history of the tournament.

"So very happy for the victory, I play well, so just enjoying that moment," Nadal said after the match.

"Win a title is important but for me the most important thing is feel myself competitive, feel myself healthy, and then with the feeling that I am improving," the tennis great said.

In their 54th match, the longest rivalry in tennis history, Nadal battled the Serbian world number 1 for two hours and 25 minutes.

The Spaniard grabbed his first title of the season, avenging his loss to the top-ranked Serb at the Australian Open.

Nadal, known as "the King of Clay," started the match with a big statement, winning the first set with a 6-0 bagel over Djokovic in just 39 minutes of play, clinching his fourth bagel overall in Rome.

This was the first time the 32-year-old Spaniard clinched a 6-0 set over the Serb in their head-to-head career encounters.

The 31-year-old Djokovic then leveled the match in the second set with 6-4 win after roughly one hour of competition, breaking Nadal's serve in the 10th game, saving four break points and forcing the decider set.

Nadal, who has played 118 finals in his career (10 more than his Serbian opponent), started the third set strongly, breaking Djokovic's serve in the first game and eventually taking a 3-1 lead.

The Spanish star then took three consecutive games, breaking the Serb twice to seal the third set 6-1 after 47 minutes.

Nadal, a 17-time Grand Slam singles champion, managed to improve his record against Djokovic to 5-3 in Rome (3-2 in finals) and to 17-7 on clay, but the Serb is still leading the overall head-to-head with a 28-26 record.

(The above story first appeared on LatestLY on May 20, 2019 08:16 AM IST. For more news and updates on politics, world, sports, entertainment and lifestyle, log on to our website latestly.com).