Rafael Nadal Birthday Special: 2008 Wimbledon Final vs Roger Federer and Other Exciting Matches of the Current World No. 2

Born in Mallorca Spain, when Nadal burst onto the scene, his game was extremely suited to the clay surface – which can be seen by his dominance in French Open – but over the years the Spaniard has continued to evolve himself and now has a total of 19 Grand Slam singles titles, the second-most in the history for a male player. 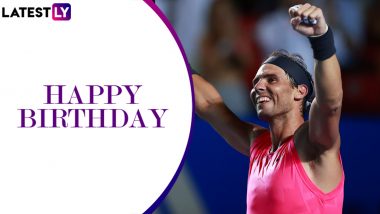 One of the best players of all time, Spanish tennis star Rafael Nadal celebrates his 34th birthday today (June 3, 2020). The Spanish turned professional at the age of 15 and recorded his first win over Ramon Delgado and since that moment he hasn’t looked back. Though Nadal had his ups and downs over the years, he has continued to overcome them and is now recognised as one of the biggest personalities in the sporting world. Japanese Brother Duo Yunosuke- Koujirou Imitate Roger Federer & Rafael Nadal.

Born in Mallorca Spain, when Nadal burst onto the scene, his game was extremely suited to the clay surface – which can be seen by his dominance in French Open – but over the years the Spaniard has continued to evolve himself and now has a total of 19 Grand Slam singles titles, the second-most in the history for a male player. The ‘King of Clay’ has won a total of 12 French Open titles, four US Open titles, two Wimbledon titles and one Australian Open title. So Nadal’s birthday, we take a look at some of his best matches. Rafael Nadal Makes his Pick Between Cristiano Ronaldo & Lionel Messi, Settles the Debate With a Great Reply.

This was one of the greatest matches of the modern era, including two of the greatest players of all time. The quality on display in this game was unheard of for a non-Grand Slam tournament as Nadal and Djokovic, treated fans to a four-hour spectacle. The clash saw the Spaniard save three match points to win the game 3-6, 7-6 (5), 7-6 (9).

This was the third consecutive meeting between them on the grandest stage at Wimbledon. The Swiss came out on top in the other two games, but Nadal finally got his hands on the elusive trophy for the first time as he defeated Federer 6-4, 6-4, 6-7 (5), 6-7 (8), 9-7 in a rain-curtailed match. This was a match for the ages which American John McEnroe described as ‘the greatest match ever played’.

To this day, this remains Nadal’s only Australian Open Grand Slam title. What made this title even more impressive was that the game started less than 24 hours after his win over Verdasco. In a clash. Lasting over four and a half hours, Nadal displayed a great level of physical and mental strength to get the better of Roger Federer 7-5, 3-6, 7-6(3), 3-6, 6-2.

A record achievement was on the line for Rafael Nadal as he took on Novak Djokovic in his fifth straight French Open final. Beating the ‘king of Clay’ on Clay is not an easy task, but the Serbian took the first set and gained the advantage. However, as the Spaniard upped the ante, Djokovic crumbled and lost the game 3-6, 7-5, 6-2, 6-4. This was the Spaniard’s 14th Grand Slam which tied him with Pete Sampras on second.

Rafael Nadal was unstoppable on his way to his first Australian Open title but faced a stern test in his Spanish compatriot. Verdasco was playing some of the best tennis of his career but in a gruelling match which lasted for five hours and 14 minutes – a record time in Australian Open – Nadal finally emerged victorious with a score of 6-7(4), 6-4, 7-6(2), 6-7(1), 6-4.

(The above story first appeared on LatestLY on Jun 03, 2020 12:05 AM IST. For more news and updates on politics, world, sports, entertainment and lifestyle, log on to our website latestly.com).