Wimbledon 2018 Match Time in IST: Day 3 Order of Play, Live Tennis Streaming, When & Where to Watch Telecast on TV & Online 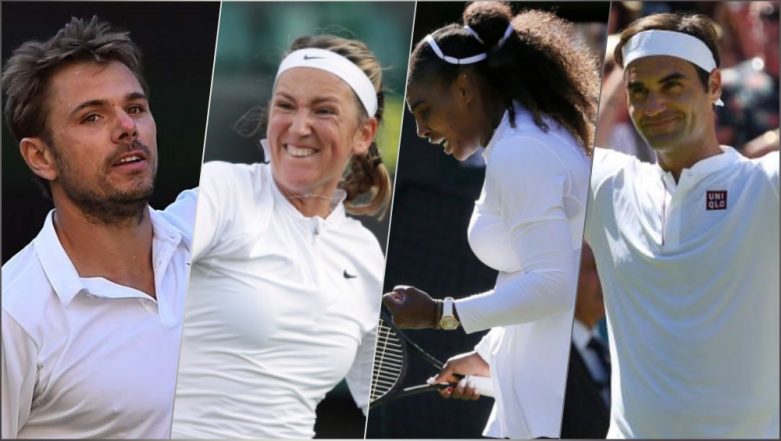 Stars continued to tumble on the second day of Wimbledon 2018 as former champions Maria Sharapova and Petra Kvitova are ousted in their first-round matches respectively. A lot was on the line for Maria who is yet finding her foot in professional tennis post returning from 15-month drug ban. But with niggling injuries and lack of form, the 31-year-old is unable to hit the top form, and it was clearly seen in her first-round shocking exit against 132nd-ranked countrywoman Vitalia Diatchenko. Sharapova lost 6-7 (3-7), 7-6 (7-3), 6-4 and it was not the only surprising Wimbledon result on Day 2. Two-time Wimbledon champion Petra Kvitova was ousted by Aliaksandra Sasnovich 6-4, 4-6, 6-0. However, all's not lost in the women’s singles as World No. 1 and newly crowned French Open champion, Simona Halep made it comfortably to the second round. As for the men’s draw, current World No. 1 Rafael Nadal had no problems dispatching Dudi Sela in straight sets to advance to the next round. On that note, we will now move to the Wimbledon 2018 Day 3 Order of Play where Roger Federer and Serena Williams will headline the second-round matches on July 4.

Defending champion Federer is up against Lukas Lacko, with the 20-time major winner holding a 2-0 head-to-head advantage over the Slovakian player. This match will not take place before 6.45pm at the Centre Court as it is former world number one and two-time Wimbledon semi-finalist Victoria Azarenka taking on the seventh seed Karolína Plíšková for a place in the third round. It is one of the exciting games we have on the cards. Another Centre Court must-watch is Serena Williams vs Viktoriya Tomova. Serena who is making a return to Wimbledon after skipping it last year due to her pregnancy is looking forward to hitting her best form at the SW19.

Wimbledon 2018 matches begin from 11.30am GMT (5.00 pm IST) onwards. Timings (in IST) of top matches to be played on the Day 3 of Wimbledon 2018 are: Roger Federer vs Lukas Lacko at 6.45pm IST, Serena Williams vs Viktoriya Tomova at 8.45 pm IST, Stan Wawrinka vs Thomas Fabbiano at 7.15 pm IST, Caroline Wozniacki vs Ekaterina Makarova at 6.45 pm IST and Victoria Azarenka vs Karolina Pliskova at 5.30 pm IST.

Where to Watch Wimbledon 2018 first-round matches live telecast? On Which TV Channels in India?

All the matches of Wimbledon 2018, right from the first-round fixtures to the women's and men's singles final matches, Star Sports Network will be airing them on Star Sports Select 1 and HD.

Is there a live streaming of Wimbledon 2018 matches available online in India?

Digital and mobile platform Hotstar owned by Star India will be live streaming all the matches of Wimbledon 2018 for tennis fans who for any reason cannot catch the live action on television. So, get ready to watch the best of tennis - be it on TV or online!