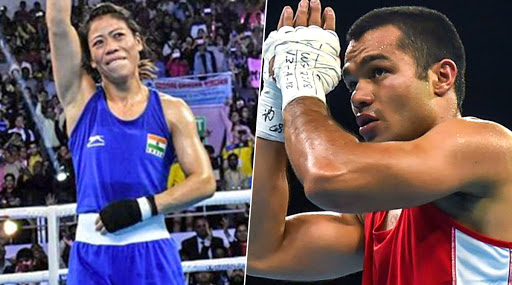 After the conclusion of the Boxing trials, a squad of 13 athletes (both male and female) has been released who will represent India at the boxing qualifier event for next year’s Olympics which will be held in Tokyo. The Asia Oceania qualifiers for the 2020 Tokyo Olympics boxing event is scheduled from February 3 to 14 and will take place in China. The men’s trails came to an end on Monday while the women’s trials were concluded on Saturday. The squad selected for the qualifiers is on the basis of the trials conducted by the Boxing Federation of India (BFI). Mary Kom Defeats Nikhat Zareen in 51kg Women's Boxing Trials to Book Place in 2020 Olympic Qualifiers.

Indian Boxing legend Mary Kom confirmed her place in the Olympic Qualifiers on Saturday when she defeated the junior world champion Nikhat Zareen 9-1 in the 51kg category finals. Along with Kom, Simranjit Kaur confirmed her place as she got the better of Sarita Devi in the 60kg finals. Sakshi Choudhary (57kg), Lovlina Borgohain (69kg) and Pooja Rani (75kg) will be the other female boxers that will represent India. Vikas Krishan confirmed his slot in the Indian men’s boxing squad as he got the better Duryodhan Singh Negi on Monday. The two-time Olympian, who competed in the 75kg for a long time is back to the 69kg division after recovering from a back injury. Tokyo Olympic 2020 Qualifiers: Vikas Krishan Makes to Indian Men’s Boxing Squad for Qualifiers.

The other male boxers representing India in the qualifiers are the Gold medal-winning duo of Gaurav Solanki (57kg) and Naman Tanwar (91kg) as they defeated Mohammed Hussamuddin and Naveen Kumar respectively. Along with them Amit Panghal (52kg), Manish Kaushik (63kg), Ashish Kumar (75kg), Sachin Kumar (81kg) and Satish Kumar (+91kg) have made it into the Indian Squad.