The Tokyo Olympics 2020 Opening Ceremony concluded a while ago. Just before the opening ceremony, there were massive protests outside National Stadium as the fans demanded the Summer Games to be called off amid an increasing number of COVID-19 cases in Japan. 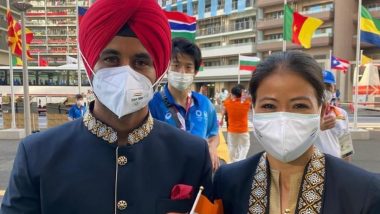 The Tokyo Olympics 2020 Opening Ceremony concluded a while ago. Just before the opening ceremony, there were massive protests outside National Stadium as the fans demanded the Summer Games to be called off amid an increasing number of COVID-19 cases in Japan. In fact, even the number of cases in the Olympic Village has gone past 100 as earlier today, the organisers announced new COVID-19 cases. The fans turned up in huge numbers and demanded the games should be called off as this would further put a risk on the health of the athletes. Team India at Tokyo Olympics 2020: Full Schedule, Date, Timing in IST & Live Streaming Details of Indian Athletes in Action at 32nd Edition of Summer Games.

The fans carried huge banners which read, "No Olympics." The visuals and the video of this event went viral on social media. Just a couple of days before the event, WHO Director-General Tedros Adhanom Ghebreyesus addressed the International Olympic Committee meeting in Tokyo. During the meeting, he said, "The pandemic is a test and the world is failing."  The situation around the world is quite alarming.

Hundreds gather outside Olympics stadium in Tokyo to protest holding #TokyoOlympics during the #COVID19 pandemic. pic.twitter.com/Ydwhi1n55t

About 200 protesters gathered on Sunday outside Shinjuku station in central Tokyo, waving signs that read “#NoOlympics”,“#NoBach.”

It was the latest in a series of protests over the last few months targeting the #TokyoOlympics.#CancelTokyoOlympics #StopTokyoOlympics #Tokyo2020 https://t.co/8WPvl9lEvH

In the meeting, he further mentioned that the pandemic is not over. "Anyone who thinks the pandemic is over because it's over in the area they live in, they are living in a fool's paradise," Ghebreyesus further said. Talking about the Olympics 2020, not the entire Indian team participated in the Opening Ceremony to avoid getting in contact with the disease. Manpreet Singh and Mary Kom were the flagbearers of the  Indian team.

(The above story first appeared on LatestLY on Jul 23, 2021 08:55 PM IST. For more news and updates on politics, world, sports, entertainment and lifestyle, log on to our website latestly.com).