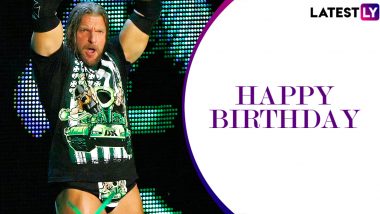 Born Paul Michael Levesque, it will be Triple H’s 51st birthday on July 27, i.e. Monday, this year. Widely hailed in being the brainchild and the founder of NXT (World Wrestling Entertainment’s developmental wing), Paul Levesque is currently working as WWE’s Executive VP of Global Talent Strategy & Development. Regarded as one of the greatest professional wrestlers of all times, Triple H (in-ring name) has had an illustrious career spanning more than two decades. In India, he has a huge fan following and is only second to the likes of The Rock, John Cena, Stone Cold Steve Austin among others. Triple H Birthday Special: Interesting Facts About Former WWE Champion ‘The Game’ As He Turns 51.

Starting his wrestling career in 1992, Triple H has a come long way since his debut. Portrayed as a heel and a babyface over the years, Triple H has been a part of many iconic fights in his spectacular career. As the decorated wrestler observes his 51st birthday this year, we at LatestLY, bring you some of his best (or one can even say, greatest) fights that he was a part of, during his stint with the WWE. Donald Trump Praises Triple H for Completing 25 Years in WWE, US President Labels him as a ‘Total Winner’.

One of the matches that catapulted Triple H’s career from a mid-card player to a main-eventer. Triple H had issued a challenge to The Rock for an International Continental Championship match at SummerSlam (in 1998) with the stipulation being ‘Ladder Match’. Guess who won the title match?

Triple H and Cactus Jack had a tumultuous rivalry back then, which saw its end take place at WWE PPV ‘No Way Out’. The high-profile contest had stipulation ‘Hell in a Cell: Title vs Career’, for the WWF Championship. Remember Foley falling from the top of the steel cage on-and-under the wrestling mat? Well, this is that match.

The match had blood, sweat, and resilience written all over it. With his wife Stephanie by the ringside, and a fierce rivalry in the ring, the ‘Last Man Standing’ match between Triple H and Chris Jericho, at Fully Reloaded PPV, was expected to deliver fireworks. And oh boy, what a match it was!

Said to be one of the most gruelling rivalries of all times, it took Triple H and Stone Cold Steve Austin a ‘Three Stages of Hell’ match to settle scores, finally. Regarded as one of the most entertaining (and hardcore match) in WWE history, guess who emerged victorious in this long-standing rivalry?

The match marked the return of Shawn Michaels after a 4-year hiatus. The ‘Non-sanctioned Street Fight’ match had everything – from ladders, belt, sledgehammer, chairs, steel steps, and trash cans. Both Triple H and Michaels gave their all in this intense bout. But, do you remember who won the fight?

The ‘Mentor vs Prodigy’ match is remembered for Triple H screwing Ric Flair’s head (in literal terms). Both battled frantically in this back-breaking ‘Last Man Standing’ match. Ric Flair weathered the storm mostly; however, 3 Pedigrees and blow by sledgehammer saw him lose the match eventually.

The two legends next met at ‘The Grandest Stage of Them All: Wrestlemania 27’ to end their long-standing rivalry. This time, Triple H and The Undertaker were involved in a ‘No Holds Barred’ match. Did ‘The Streak’ remain undefeated?

If their Wrestlemania bout was any less of a spectacle, Triple H vs The Undertaker at Wrestlemania only one-upped their previous clash. This time, the legends met in a ‘Hell in a Cell’ match, with Shawn Michaels as the guest referee. The contest which was billed as an ‘End of an Era’, left everybody in tears when the three megastars embraced at the stage’s entrance.

After getting his arm broken by Brock Lesnar twice in the year, Triple H and Lesnar took their rivalry to ‘The Show of Shows: Wrestlemania 29’ next. The match was stipulated ‘No Holds Barred’ contest with Triple H’s career at stake. No brownie points to guess the winner here.

The match is known to be the first match of Sting’s WWE career. The match happens to be one of the most exciting Wrestlemania matches. From D-Generation X, NWO, and Shawn Michaels interfering in the match, to both Sting and Triple H using their respective weapons (Baseball and Sledgehammer), this Wrestlemania classic is a must-watch on this list.

The following list is a fan’s account of some of the greatest matches in Triple H’s career, so no hard feelings for the matches which aren’t in this list. We, at LatestLY, wish Triple H, one of the finest wrestlers in the history of sports entertainment, a very ‘Happy 51st Birthday’. We hope you enjoyed watching this list of “Triple H’s greatest WWE matches”.

(The above story first appeared on LatestLY on Jul 27, 2020 11:31 AM IST. For more news and updates on politics, world, sports, entertainment and lifestyle, log on to our website latestly.com).